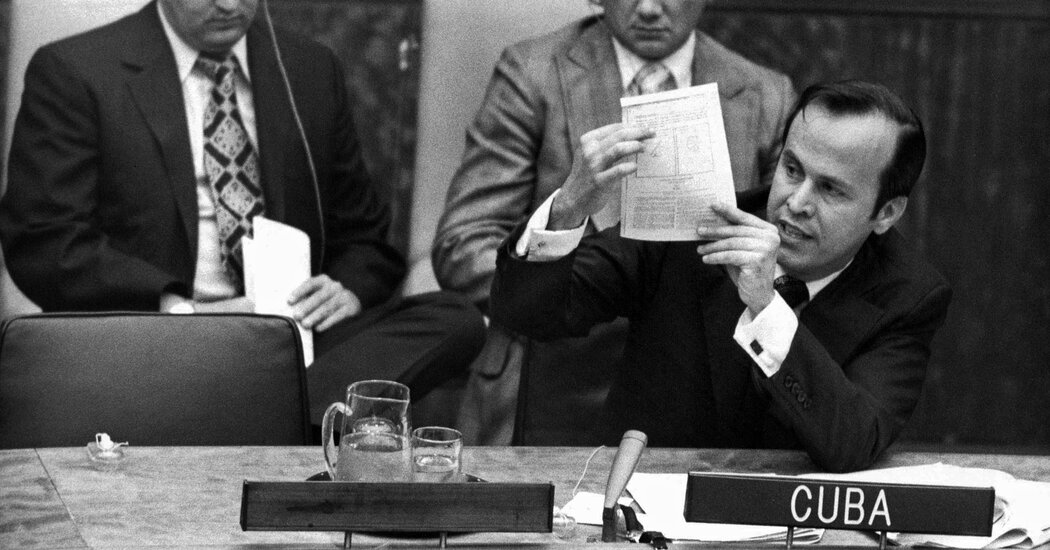 Ricardo Alarcón, who was once Cuba’s leading diplomat, the third most powerful Cuban Communist after Fidel Castro and his brother Raul, and his country’s most prominent conciliator with the United States, died on Saturday in Havana. He was 84.

His death was announced by the Cuban Foreign Ministry. No cause was specified.

From 1966 to 1978, and again from 1990 to 1991, Mr. Alarcón was Cuba’s representative to the United Nations. He served a term as vice president of the General Assembly and for two months was president of the Security Council.

He was appointed foreign minister in 1992 and from 1993 to 2013 was president of Cuba’s National Assembly, a legislative body that typically complied with President Castro’s agenda.

Fluent in English and known for his white guayabera shirts and Cohiba cigars, Mr. Alarcón became a familiar figure in the negotiations that ended an uncontrollable exodus of thousands of Cuban refugees to Florida on flimsy rafts when the Clinton administration agreed in 1994 to issue 20,000 visas annually to Cuban immigrants.

In 2000, he was instrumental in engineering the return of the young castaway Elián González from relatives in Miami to his father in Cuba after a fierce seven-month legal battle. The boy, who was about 5 years old at the time, had landed in a truck tire off Fort Lauderdale, set adrift after his mother and a dozen others fleeing Cuba drowned in a failed ocean crossing in the Florida Straits.

Mr. Alarcón’s role in the González case, and his success about a decade later in winning the release of five Cuban spies who had been accused of infiltrating anti-Castro refugee factions in Florida, were a prelude to the eventual normalization of diplomatic relations between the United States and Cuba.

His success as a negotiator notwithstanding, Mr. Alarcón was aggressive in defending his country’s ideology and denouncing the United States.

“The Americans said, as early as 1959, that Mr. Castro had the support of the vast majority of people,” he told The Guardian in 2006. “They had to undermine that support by denying money and exports to cause hunger and unemployment and massive suffering that would have a people so disgusted that they would want change.”

“For me,” he added, “the starting point is the recognition that democracy should begin with Pericles’ definition — that society is for the benefit of the majority — and should not be imposed from outside.”

William M. LeoGrande, a professor of government at American University in Washington, described Mr. Alarcón in an email as “an indefatigable supporter and defender of ‘the Revolution’” who, “in his dealings with the United States, never wavered in the belief that a more normal relationship would benefit both countries — and was possible.”

But Theodore Henken, a sociology professor at Baruch College of the City University of New York, added, also by email, that Mr. Alarcón was “far too comfortable in a system where the people hold no power to demand that their nonelected leaders remain accountable to them.”

Ricardo Alarcón de Quesada was born on May 21, 1937, in Havana to a family described as upper middle class.

He entered the University of Havana in 1954 and, as a leader of the Students’ Federation and the Union of Young Communists, organized urban student support for the revolution as a civilian while the Castro brothers and Che Guevara battled guerrilla war on the entrenched American-backed dictator Fulgencio Batista.

Mr. Alarcón graduated with a doctorate in philosophy and humanities and, at 25, was named director of the Americas division of Cuba’s Foreign Ministry. Four years later, he was appointed ambassador to the U.N., where he also served as president of the Committee on the Exercise of the Inalienable Rights of the Palestinian People.

He was also a member of the Central Committee of the Cuban Communist Party until 2013. His closest aide had been arrested and charged with spying a year earlier, and he reportedly had fallen from grace because he was known as a Fidel Castro loyalist rather than a confidant of Raul Castro, who had assumed power in 2008.

He was married to Margarita Perea Maza, who died in 2008. Information on survivors was not immediately available.

One of Mr. Alarcón’s disciples, Deputy Foreign Minister Josefina Vidal, wrote on Twitter, “To Ricardo Alarcón de Quesada, master of the diplomats of our generation, we will always keep deep respect, admiration and infinite affection.”

Johnny Depp v Amber Heard: ‘The only way out of this is death’, star allegedly told actress after engagement | Ents & Arts News