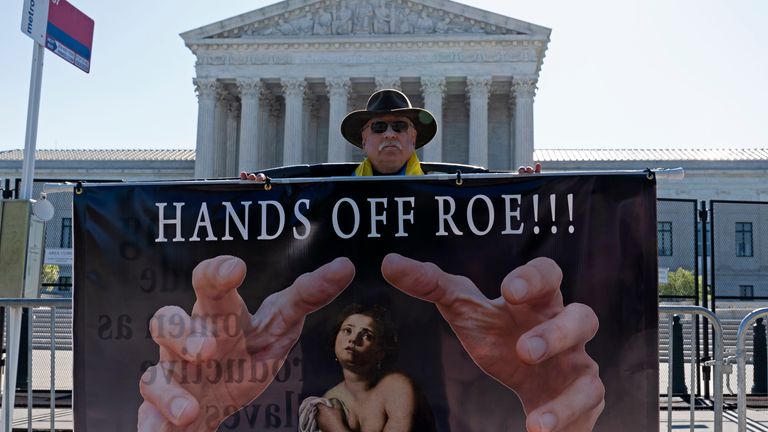 The US Supreme Court has voted to overturn the constitutional right to choose abortion which has existed for almost 50 years, paving the way for half the country to severely restrict or completely ban the practice.

The power to decide on abortion rights for tens of millions of women will now be handed to the 50 states to determine individually.

It is one of the most consequential rulings by the Supreme Court, the highest court in America, in recent history.

The court voted 6-3, handing a momentous victory to Republicans and religious conservatives who want to limit or ban the procedure.

Both anti-abortion and pro-abortion campaigners had gathered outside the court in Washington DC ahead of the decision announcement, leading to jubilant and downhearted scenes in equal measure when it was revealed.

What happens now the Supreme Court has overruled the constitutional right to an abortion?

At least 25 states are poised to introduce new laws, or reactivate dormant law, which will make it illegal to access abortion in many cases, including, in some instances, where conception has resulted from rape or incest.

Many of those states are in the south of the country. Texas, Louisiana and Mississippi are three of 13 states which have so called “trigger bans” in place, which mean abortion will be banned immediately as of today or in the coming days and weeks.

The opinion, written by Justice Samuel Alito, overturns a landmark 1973 ruling known as “Roe versus Wade” which legalised abortion nationwide up to the point of foetal viability, generally accepted to be around 24 weeks into pregnancy.

A subsequent 1992 decision – known as “Planned Parenthood versus Casey” – largely upheld that right, but this sounds the death knell for those protections of reproductive rights.

Pro-choice groups, who believe abortion should be viewed as standard healthcare and a human right, say the removal of the constitutional right to abortion will create so called “abortion deserts” forcing women to travel hundreds or thousands of miles to terminate unwanted pregnancies.

The new opinion originates from the state of Mississippi which was arguing to establish a law which would ban abortion after 15 weeks of pregnancy, significantly earlier than the point of foetal viability.

In what was a stunning and unprecedented leak, a draft opinion was published on the US political website Politico in May, indicating that the court was poised to overturn Roe versus Wade.

It prompted widespread protest across the United States and reignited debate between pro-life and pro-choice groups.

Now that ruling has been confirmed it is likely to inflame political tensions once more.

While abortion is one of the most divisive issues in America, polling has shown that the majority of Americans opposed Roe being overturned.

Earlier this month a poll by the analytics company Gallup found that 55% of Americans identify as “pro-choice.”