The leaked draft opinion document that suggests the Supreme Court is set to overturn a historic law that legalised abortion is authentic, US Chief Justice John Roberts has said.

In a draft ‘opinion’ document written by Justice Samuel Alito, the court says the landmark Roe v Wade decision in 1973 was “egregiously wrong from the start”.

The authenticity of the document was in question but the Mr Roberts has confirmed it is real, which indicates that a majority of the nine Supreme Court justices are set to overturn the constitutional right to abortion.

He also announced an investigation into how the document was leaked will be launched, calling it an “egregious breach of trust.”

He described it as a “betrayal of the confidences of the court” that aimed to “undermine the integrity” of its operations.

“I have directed the Marshal of the Court to launch an investigation into the source of the leak,” he added.

US President Joe Biden says he opposes the move to overturn a historic law that legalised abortion, saying the right is “fundamental” for women and that he was ready to act if the court attempts to roll back abortion rights.

“I believe that a woman’s right to choose is fundamental, Roe has been the law of the land for almost fifty years, and basic fairness and the stability of our law demand that it not be overturned,” he said.

“If the court does overturn Roe, it will fall on our nation’s elected officials at all levels of government to protect a woman’s right to choose.”

He added that a decision overturning Roe would raise the stakes for voters in November’s heated midterm elections.

“It will fall on voters to elect pro-choice officials this November. At the federal level, we will need more pro-choice senators and a pro-choice majority in the House to adopt legislation that codifies Roe, which I will work to pass and sign into law,” the president said.

Justice Samuel Alito’s document was first reported by Politico, which said it had been circulated inside the court. 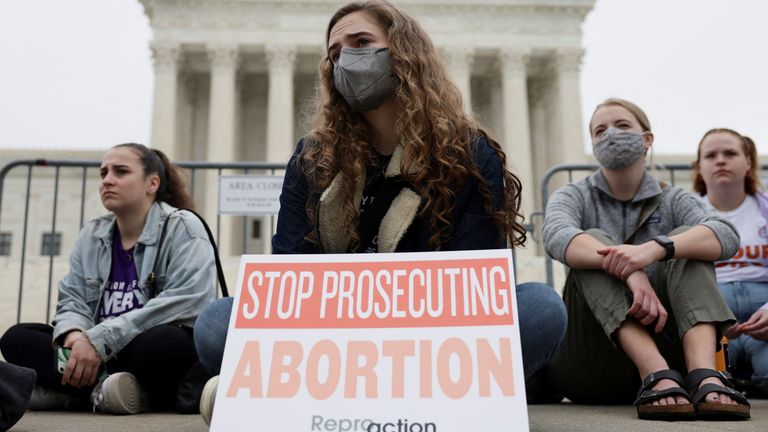 US divided on abortion after leak

The draft opinion reads: “We hold that Roe and Casey must be overruled”, referencing the 1992 case Planned Parenthood v Casey that affirmed Roe’s finding of a constitutional right to abortion services – but allowed states to place some constraints on the practice.

The Supreme Court has yet to issue an official ruling in the case, and opinions – and even justices’ votes – have been known to change during the drafting process.

The court is expected to rule on the case before its term is up in late June or early July.

What has the reaction been?

The leaked document has been met with disappointment by many, including pro-abortion rights’ groups and senators.

Planned Parenthood said it “makes clear” its “deepest fears are coming true” and the US has reached a “crisis moment”.

Democratic Senator Bernie Sanders called for people to act “now” to “pass legislation that codifies Roe v Wade as the law of the land”.

Read more: ‘Do something Democrats’ – Abortion rights supporters gather outside US Supreme Court

In a joint statement, Senate Majority Leader Chuck Schumer and House Speaker Nancy Pelosi said if the report is true, the Supreme Court is “poised to inflict the greatest restriction of rights in the past fifty years”.

However, US Senate Republican Leader Mitch McConnell described the leaking of the report as an “attack on the independence of the Supreme Court” and “another escalation in the radical left’s ongoing campaign to bully and intimidate federal judges”.

“The disgraceful statements by President Biden, Speaker Pelosi, and Leader Schumer refuse to defend judicial independence and the rule of law and instead play into this toxic spectacle. Real leaders should defend the Court’s independence unconditionally,” he said.

“This lawless action should be investigated and punished as fully as possible. The chief justice must get to the bottom of it and the Department of Justice must pursue criminal charges if applicable.”

It comes amid a legislative push to restrict abortion in several Republican-led states, with Oklahoma being the most recent by passing several bills, including one that goes into effect this summer making it a felony to perform an abortion.

Analysis by Greg Milam, US correspondent

The US Supreme Court’s ruling on abortion is one of the most keenly anticipated and potentially consequential in decades of American justice.

That makes the leak of a draft ruling all the more astonishing, and certain to spark a backlash against the court and states who have pushed for a ban on abortion.

The contents of the leaked opinion, written by conservative Justice Samuel Alito, will have come as little surprise to anyone. The conservative leaning of the court these days led most to expect it would side with those Republican states when it delivered its final opinion.

When Donald Trump, as a right of the office of president, had the opportunity to appoint three new justices to the court, many commentators saw the writing on the wall. Abortion was an issue that mattered to Trump voters.

But the unprecedented nature of this leak – hardly anything ever leaks from the inner workings of the Supreme Court, let alone draft opinions – will enrage those seeking to protect the right to seek an abortion.

If the court does, as Alito suggests, overturn the constitutional right to seek an abortion it will be for individual states to ban or restrict it. The ruling would trigger an automatic ban in 13 states, and automatically keep it legal in 17 others.

Campaigners say it poses risks to the health of women across America, when travelling hundreds of miles to states that permit abortion is not feasible.

The Biden administration has been outspoken in its condemnation of laws restricting abortion. The White House and America face a test of how to respond.

What does recent polling on abortion rights show?

Abortion rights are a highly argued topic in the US, with polling showing relatively few Americans want to see Roe overturned.

In 2020, AP VoteCast found 69% of voters in the presidential election said the Supreme Court should leave the Roe Wade decision as is; just 29% said the court should overturn the decision.

In general, AP-NORC polling finds a majority of the public favours abortion as being legal in most or all cases.

Still, when asked about abortion policy generally, Americans have nuanced attitudes on the issue, and many don’t think abortion should be possible after the first trimester or that women should be able to obtain a legal abortion for any reason.