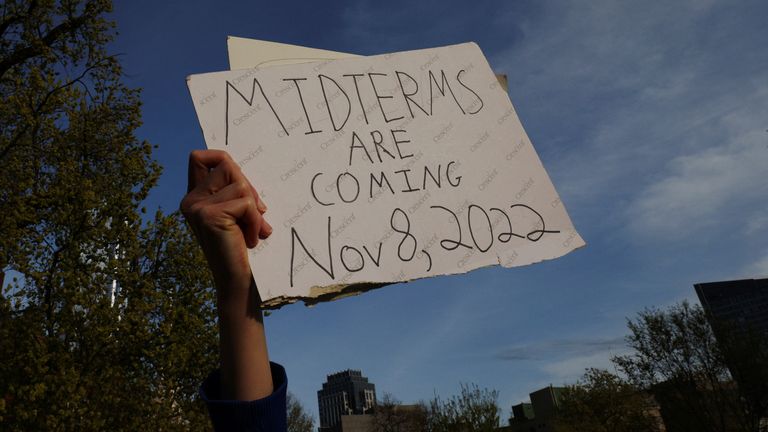 Nearly two-thirds of Americans are more likely to back candidates in the November midterm elections who support the right to abortion, says a new poll.

The survey of 998 voters also found that a plurality of Americans – 41% – said the country would be a worse place to live if the US Supreme Court overturned the 1973 Roe v Wade decision that established the right to abortion nationwide.

America’s decades-old battle over abortion rights was reignited on Tuesday as the Supreme Court confirmed a leaked draft opinion that signalled a majority of the nine justices would soon overturn the right, was genuine.

The document, written by Justice Samuel Alito, described the 1973 decision as “egregiously wrong from the start”.

President Joe Biden denounced the expected move as “radical” as Democrats in Washington and in statehouses scrambled to try to find a response to defend a right women in the United States have held for almost half a century.

“I believe that a woman’s right to choose is fundamental, Roe has been the law of the land for almost fifty years, and basic fairness and the stability of our law demand that it not be overturned,” he said.

Explained:
What is Roe v Wade and how could abortion become illegal in many US states?

And on Tuesday, just hours after the opinion came to light, the Reuters/Ipsos poll appeared to show overturning Roe v Wade might have political implications.

It revealed that 63% of respondents, including 78% of Democrats and 49% of Republicans, said they were more likely to support candidates who support abortion rights in the 8 November election that will determine control of Congress for the next two years.

It also found that 41% of Americans thought repealing Roe v Wade would make the United States a worse place to live.

Read more:
‘Do something Democrats’ – Abortion rights supporters gather outside US Supreme Court

The looming Supreme Court decision, expected to be issued by the end of June, represents the result of years of work by Republicans cementing a 6-3 conservative majority on the high court.

It could even change the dynamic of the election, in which Republicans had been predicted to recapture control of at least one chamber of Congress, allowing them to block Democratic President Joe Biden’s legislative agenda.