‘She doesn’t want the drama’: anger as Chicago mayor comes up short on police reform | Chicago 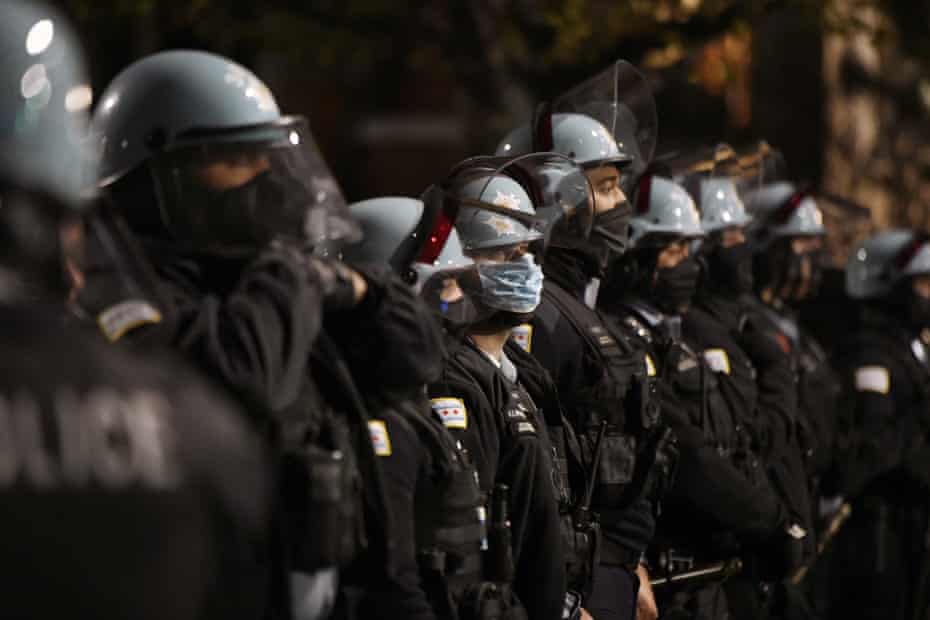 On 20 May 2019, the freshly elected Chicago mayor Lori Lightfoot delivered her inauguration speech to a jubilant audience.

It was imbued with promises of fundamental change – tailored care for blighted neighborhoods, solutions to government corruption and endemic violent crime, an ambitious agenda for tackling deep-rooted faults in the city.

She pledged to reform the Chicago police department, promising to “continue the hard but essential work of forging partnerships between police officers and the community premised on mutual respect, accountability and a recognition that the destinies of police and community are inextricably intertwined”.

Police reform seemed like a perfect task for Lightfoot given one of her prior roles of leading the city’s special taskforce on police accountability and reform.

She issued a scathing report on the department in 2016, addressing broken trust between police and community and noting: “A painful but necessary reckoning is upon us.”

It urged sweeping change and backed a “widely held belief the police have no regard for the sanctity of life when it comes to people of color”.

But sweeping change awaits. Almost two years into office, Lightfoot is under fire, accused of back-pedaling on accountability and reform while botching some high-profile cases involving police killing or misconduct.

There’s outrage over Chicago police earlier this month killing 13-year-old Adam Toledo after a chase that ended with the boy being shot dead after stopping and putting his hands up as ordered by the pursuing officer.

Elizabeth Toledo, Adam’s mother, had not been notified about his death until two days after the shooting, leaving her to think her son was missing. Lightfoot choked up while admitting “we failed Adam”.

He was one in a growing record of police killing children across America, with victims disproportionately being Black and Hispanic youth.

But the Mapping Police Violence project found that between 2013 and 2021, Chicago police killed more under-18s than any other local law enforcement agency in the country – at least 12.

And Lightfoot last December bungled the fallout from an incident that had happened before her mayorship, where Anjanette Young’s home was raided by police who had the wrong address, guns drawn, and she was handcuffed while naked.

The mayor admitted she knew about the raid in 2019, contradicting previous claims otherwise, and the city also attempted to block the video release of the raid, Lightfoot later calling the attempt a “mistake”.

Activists called for Lightfoot’s resignation in both instances, and all amid a surge in shootings within city communities.

Progress on police reform is close to fruitless, leaving activists, many city council members, or aldermen, and Chicagoans distrustful.

“I view her as not having fulfilled those campaign promises, because she hasn’t,” said Chicago’s first ward alderman Daniel La Spata, bluntly.

Lightfoot succeeded Rahm Emanuel, whose mayorship was controversial on several fronts. Emanuel was accused of an attempted cover-up of the murder Laquan McDonald, a Black 17-year-old, by Jason Van Dyke, a white officer.

McDonald was shot 16 times by Van Dyke in 2014 as he was moving away from the police.

Following McDonald’s death, a Department of Justice investigation into Chicago police delivered a blistering report that found an epidemic use of racist, excessive force as well as corruption among officers.

The new mayor said in 2019: “I campaigned on change, you voted for change.”

But is change coming?

“When you’re replacing a mayor like Rahm Emanuel – who in many ways had to leave office because he covered up the murder of Laquan McDonald – and you look at the way that the murder of Adam Toledo has been handled, you begin to see a lot of similarities,” said 35th ward alderman Carlos Ramirez-Rosa.

The shooting death of Cedrick Chatman, 17, by officers in 2013, and the 2015 killing of 22-year-old Rekia Boyd made national headlines, as well as McDonald’s murder.

And there was “Homan Square,” a notorious interrogation warehouse used by Chicago police, which ignited international outrage after reports emerged in 2015 detailing thousands of people being illegally detained and tortured by police into false confessions.

Alongside more well-known travesties, there are also thousands upon thousands of allegations made against Chicago police, according to data from the Citizens Police Data Project, a tool created to publicize allegations of Chicago police abuse, with little result.

She had supported a plan for a local law to create such a board, generated by the Grassroots Alliance for Police Accountability (GAPA), until she backtracked in October last year.

The mayor renounced her support of the GAPA ordinance after claiming activists were unwilling to compromise or “come forward with a proposal that solves … outstanding issues.”

But Carlil Pittman, a youth organizer with Southwest Organizing Project, co-founder of the Goodkids Madcity advocacy and a representative of GAPA, described an unproductive environment, saying the mayor would lapse in communication with organizers, cancel public safety committee meetings and refuse to negotiate ordinance policy.

“Her words were, ‘If you’re here to negotiate [that] policy-making power be in the hands of this community commission, we can stop this conversation now’. Her exact words? ‘I’m not giving up policy-making powers’,” Pittman told the Guardian.

Lightfoot, instead, has repeatedly asserted that her own ordinance on civilian oversight is coming.

In the meantime, a joint proposal called the empowering communities for public safety ordinance, created by GAPA and the Civilian Police Accountability Council that would lead to a referendum on creating an elected policing oversight body, has gained support among progressives, with many calling for the mayor to support it.

Lightfoot has celebrated progress on transparency, including reforms in police union contracts and a creation of guidelines to release materials about police misconduct.

However, a proposal requiring Chicago to publish closed complaints against the police dating back to 1994 received her public disapproval.

“She doesn’t want any of the drama that comes with the acknowledgement that for years, for decades, [Chicago] police have been operating in a disturbing and disgusting way,” said Trina Reynolds-Tyler, a human rights organizer and the director of data at the Invisible Institute, a journalism production company on Chicago’s Southside focused on holding public bodies to account.

In a recently passed $12.8bn budget, Lightfoot allocated $65m to housing and anti-homelessness efforts. She also included $20m in community mental health programs and $1m for a new program to pair police with mental health workers on some emergency calls.

Amid calls for reorganization she reduced the police’s eye-popping $1.69bn budget by just $58.9m.

Chicago’s population of 2.6 million makes it the third largest US city, but it has the second highest per capita spending on police after New York, according to US News & World Report, and the most officers per capita, according to the Injustice Watch journalism nonprofit.

Yet many Chicagoans feel under-protected. And the city is still far behind on goals set under yet another indictment of its track record, a court-ordered consent decree to overhaul policing.

It was issued in February 2019 but also stemmed from the murder of McDonald, with legal action involving the state attorney general, Black Lives Matter Chicago and the American Civil Liberties Union of Illinois.

Last summer, in light of George Floyd’s murder by a white officer in Minneapolis, Lightfoot was part of a group of city mayors who promoted reform while rejecting defunding as a route to transformation.

The Guardian contacted Lightfoot’s office about progress of her promised reforms, but they declined to comment.

But while Lightfoot’s limited results may seem surprising, a look further back shows a pattern of sidestepping real reform, Reynolds-Tyler argued.

In 2002, as chief administrator of the Chicago Office of Professional Standards (OPS), a weak and now defunct police oversight body, Lightfoot rarely managed to get any cases of police misconduct prosecuted, according to the Appeal non-profit site, and backed officers in some highly contentious cases.

The outlook is grim, and yet the need for transformation is as great as ever.
Alderman Ramirez-Rosa said: “The people of the city of Chicago are crying out for change as it relates to our broken policing system. We owe it to Anjanette Young, we owe it to Laquan McDonald, we owe it to Rakia Boyd, we owe it to Adam Toledo to pass police reform as a first step to ending racist policing.”

Philippines protests ‘blocking’ of its patrol ships by China