By Rebecca Kuku in Port Moresby and Ben Doherty Pacific Editor On Feb 25, 2021 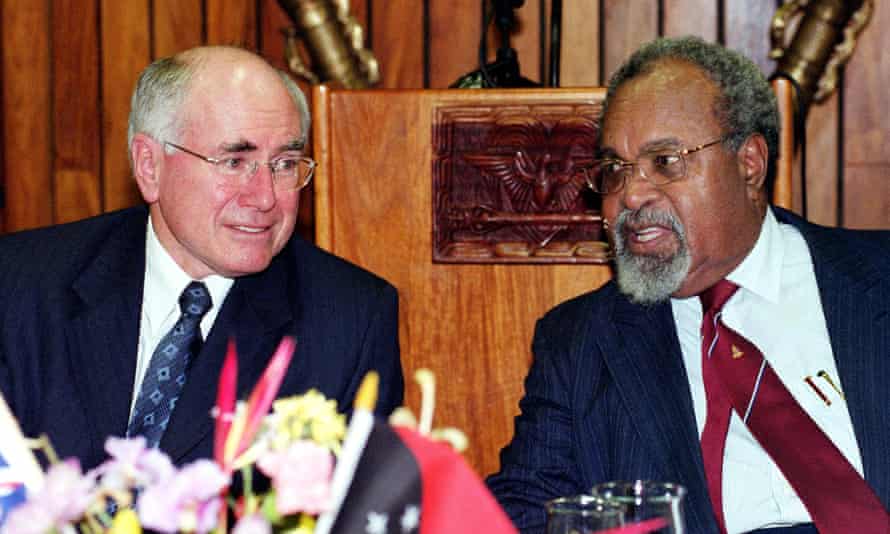 Known throughout the country as “Papa blo Kantri” – Father of the Nation – Somare served as prime minister for a total of 17 years, over four terms, and was revered as a pivotal figure in the country’s peaceful transformation from colony to independent nation. He is depicted on PNG’s 50 Kina banknote.

Somare was the first and only chief minister of the Australian administered territory of Papua New Guinea, and helped found the Pangu party, which led the country to its independence in 1975.

Somare would then become the country’s first prime minister, telling his nascent nation in a midnight radio address on its first day in existence: “I wish to remind all that this is just the beginning. Now we must stand on our own two feet and work harder than ever before. We are indeed masters of our own destiny”.

Somare’s death, after a short battle with pancreatic cancer, was confirmed by his family early Friday morning.

“Sir Michael was a loyal husband to our mother and great father first to her children, then grandchildren and great granddaughter. But we are endeared that many Papua New Guineans equally embraced Sir Michael as father and grandfather,” his daughter Betha Somare said in a statement.

Born in 1936 in Rabaul, Somare was still a child when he moved with his family back to his father’s ancestral home of Karau village in East Sepik. It was the province he identified with throughout his life, and from where he would draw his political power base for all of his nearly five decade career in public life.

His earliest education was in a Japanese-run primary school during the second world war, where he learned to read, write and count in Japanese.

He would later graduate from Sogeri High School, becoming a teacher, then radio broadcaster, before helping found the Pangu party in 1967. The next year, he contested elections for PNG’s new house of assembly and became chief minister.

His absence led to a constitutional crisis, when he and Peter O’Neill both claimed the prime ministership: the impasse was only finally resolved with elections in 2012.

There were controversies during his premierships. In 2005, he took exception to being asked to remove his sandals by security officers at Brisbane airport, leading to a diplomatic standoff with Australia.

And the next year, when attorney Julian Moti was wanted by Australia for extradition on alleged child sexual abuse charges, Moti was instead flown out of PNG to the Solomon Islands on a PNG defence force aircraft. Somare denied any involvement.

On his 80th birthday, Somare said seeing his country united and free was the realisation of all of his ambitions.

“My lifelong dream for this remarkable country was fulfilled at independence when we started with peace,” he said.

“PNG is a melting pot of tribes, clans and families that were never meant to be the same. But despite all this, I have found that it is not a difficult nation to unite.”

Australian prime minister Scott Morrison described Somare as the “founding father of democratic and independent PNG and a great friend to Australia”.

“My heartfelt condolences to his family, Prime Minister Marape, and the people of PNG. Australians stand with you in this time of sadness. May he rest in peace.”

Fight for $15: US retailer Costco raises its hourly wage to $16 | Coronavirus pandemic News