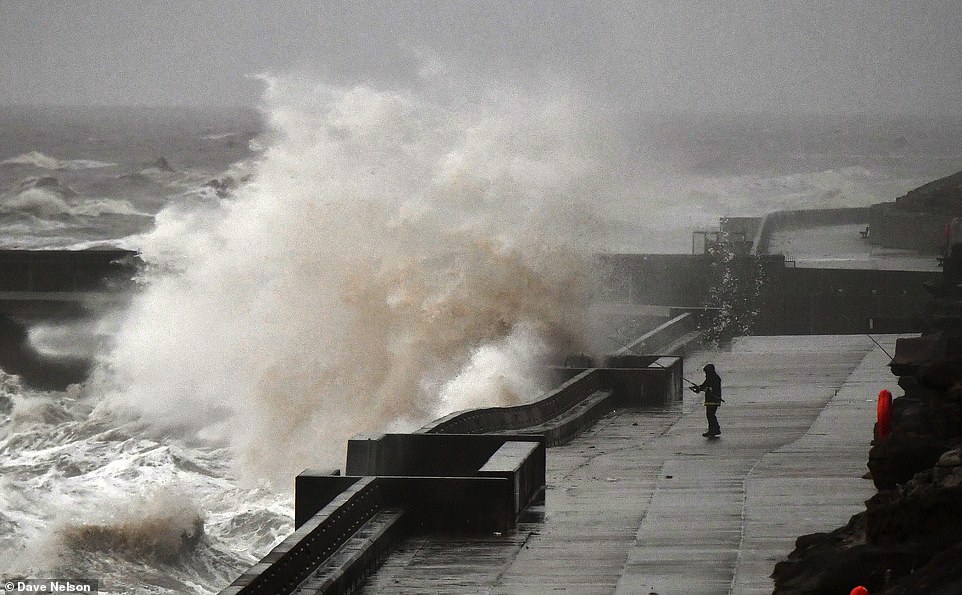 Britain is set to swap snow for rain this week as milder temperatures take hold – but while the north faces a warning for ice, forecasters have predicted a new Beast from the East could arrive later this month.

Temperatures settled above freezing for most of the country overnight, with lows of 0C in Shoreham and -1C on the Shetland Islands.

As last week’s cold snap comes to an end, rain and showers are set to be moving in across, with persistent downpours in the north west.

Overnight more heavy rain has been forecast further south, with some snow still in northern parts of the country and more downpours forecast for Wednesday and Thursday.

This morning the Met Office issued another warning for ice in Scotland and northern England, starting from 3pm today and ending at around 11am tomorrow.

Northern parts of Scotland are being warned about potential disruption brought about by snow and rain, but the rest of the country is no longer under any weather warning.

Up to 10cm of snow could fall on higher ground in Scotland today.

It comes after snow and ice still blanketed parts of northern England yesterday – amid concerns heavy snow and polar temperature could hit the UK later this month as conditions are coming into place for a second ‘Beast from the East’. 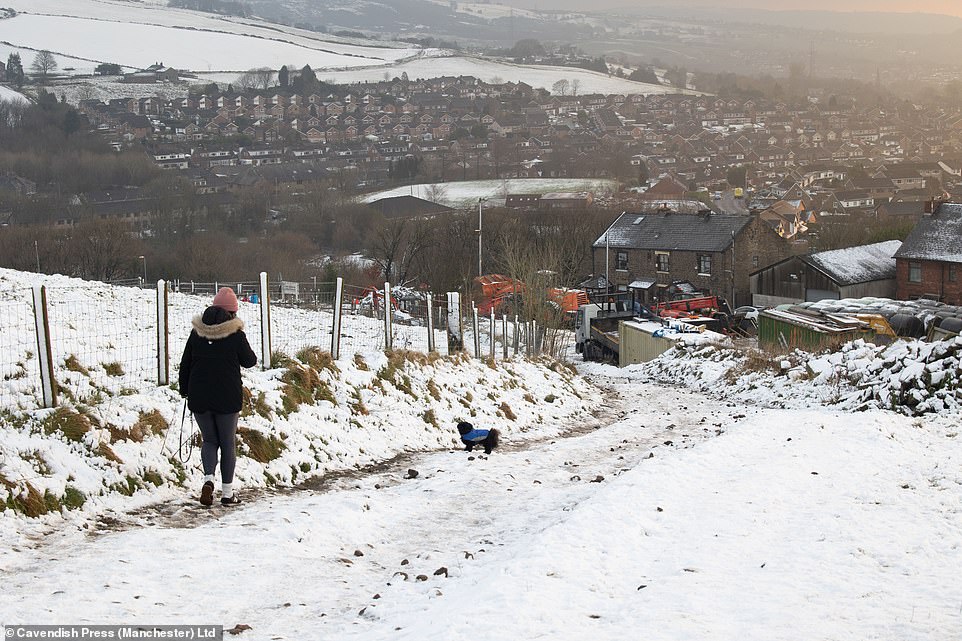 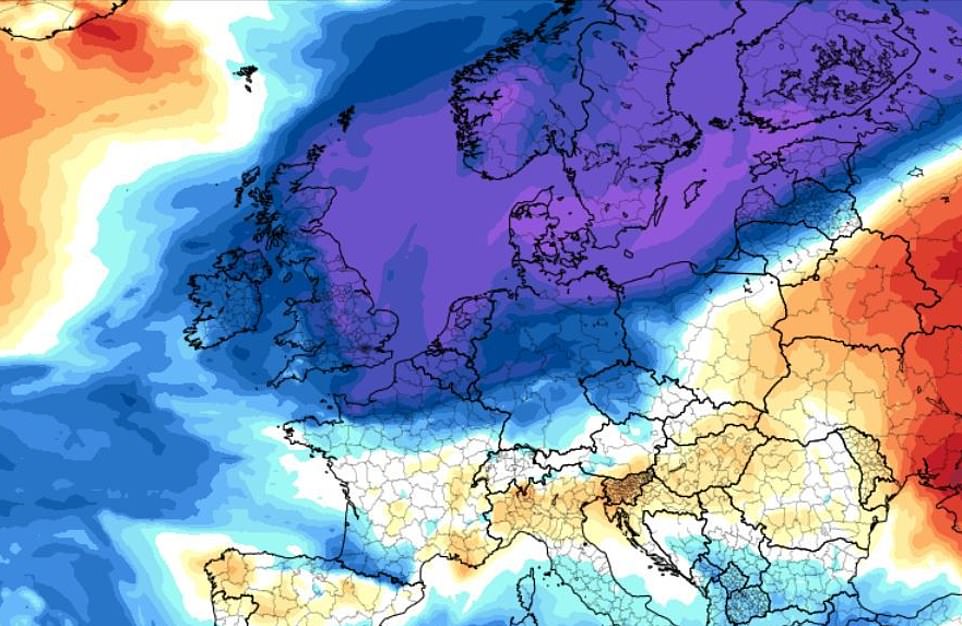 Meteorologists have confirmed that a sudden stratospheric warming (SSW) event is developing high above the Arctic, the same phenomenon which caused the country to grind to a halt two years ago.

Parts of the stratosphere have already warmed by around 50C – which cannot be felt on earth’s surface – and this has the power to interrupt the jet stream which controls much of Britain’s weather.

Experts say it is possible that the stream could be reversed, and that the country might be hit the freezing conditions currently seen in the north of Scandinavia.

‘The stratosphere above the North Pole has warmed, it started its process on the 4th of January and has been rapidly warming over the last few days,’ said Met Office forecaster Craig Snell.

It could result in the whole country being covered by heavy snow in blizzards, and daytime temperatures as low as -5C by the end of January and into February.

There are fears such an event would wreak havoc on the NHS and the ability to deliver food and vaccines to vulnerable people isolating at home.

Simon Lee, an atmospheric science and weather forecasting researcher at the University of Reading, told The Mirror: ‘A weakening of the jet stream often occurs after an SSW, meaning the UK is now more prone to outbreaks of colder weather from the north and east than it was before.

‘A weakened polar vortex can last for up to two months, so there is an increased likelihood of colder, drier weather occurring in Europe sometime in the next 4-6 weeks due to weaker Atlantic westerly winds. 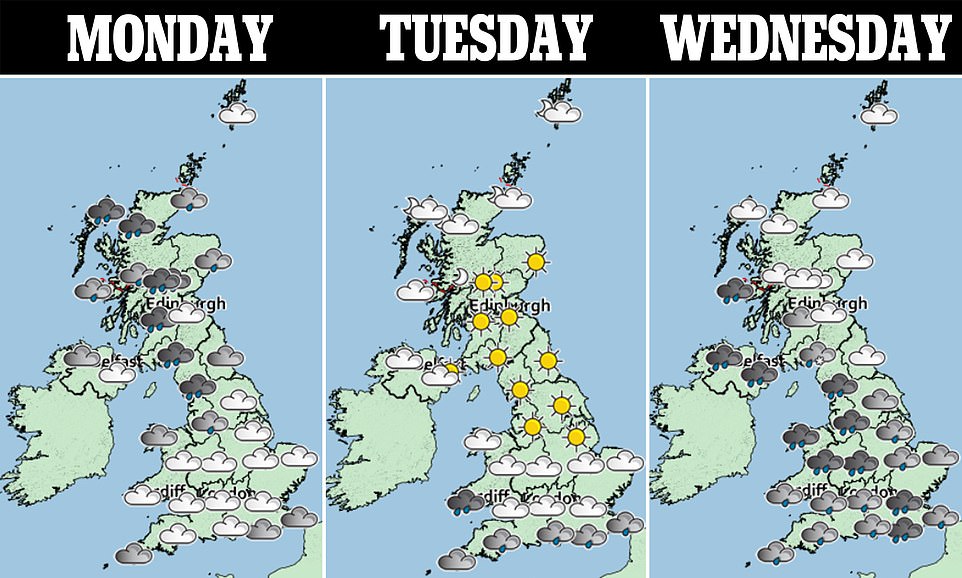 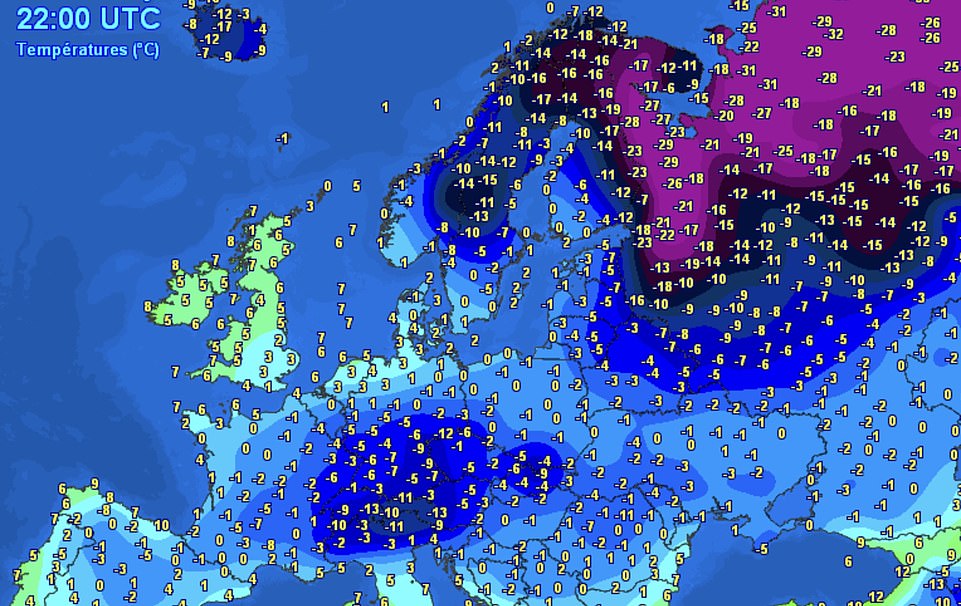 It could result in the whole country being covered by heavy snow in blizzards, and daytime temperatures as low as -5C by the end of January and into February. Pictured: Freezing temperatures have been seen across northern Scandinavia this week 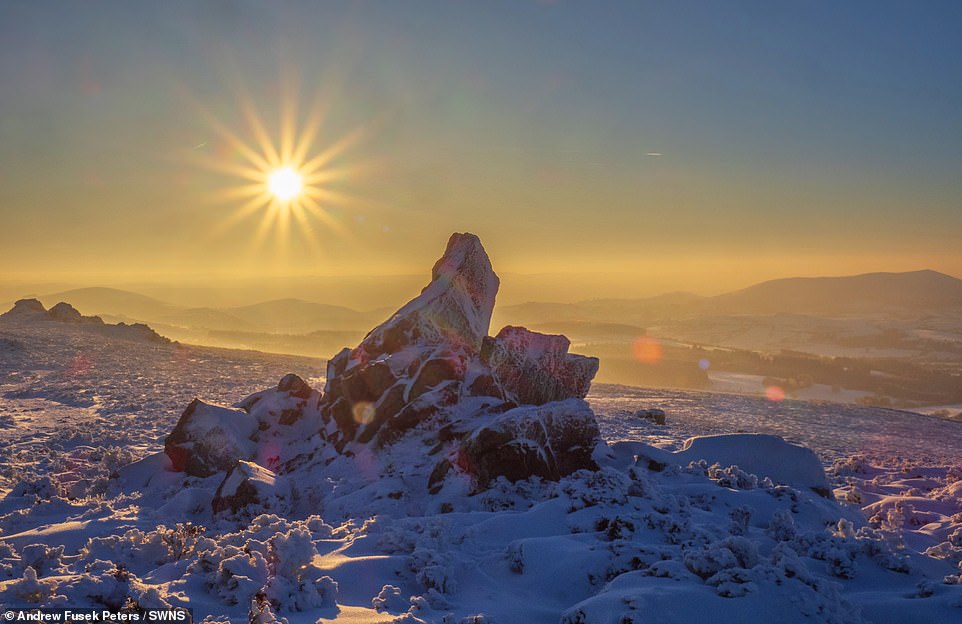 After a week of weather warnings for snow, ice and rain, including in Greater Manchester (pictured), the Met Office is into its final day of alerts – which now covers Scotland and northern England 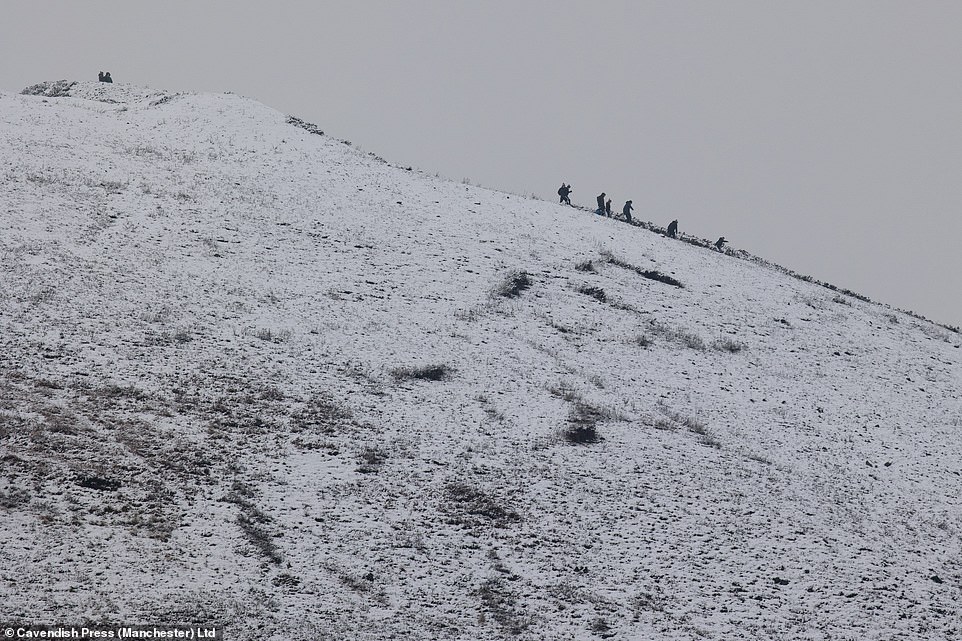 While snow remained over the Pennines yesterday, there were renewed warnings that a ‘Beast from the East’ could return. In 2018, Arctic conditions caused an estimated £10million worth of damage in just three days 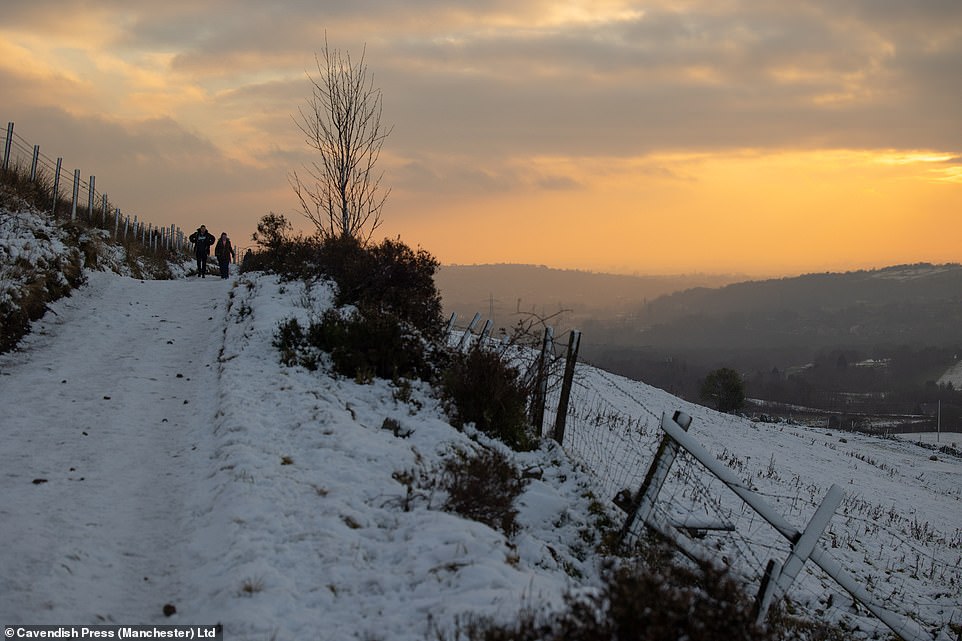 Meteorologists have confirmed that a sudden stratospheric warming (SSW) event is developing high above the Arctic, the same phenomenon which caused the country to grind to a halt two years ago. Pictured: Sunset over the Pennines yesterday 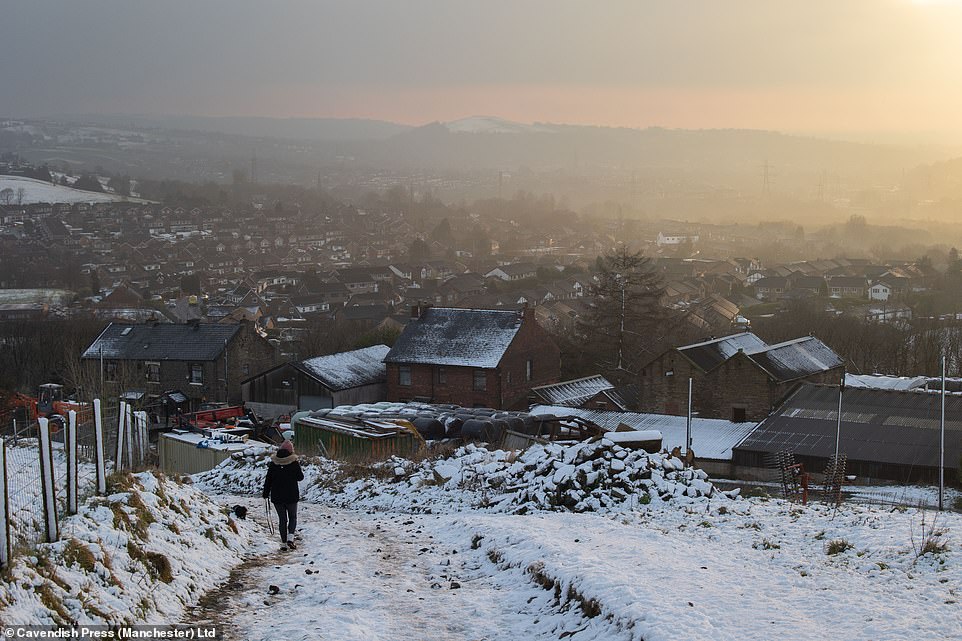 Freezing conditions currently seen in northern Scandinavia could move across to Britain later this month – after last week brought snow across the country, including in Greater Manchester yesterday 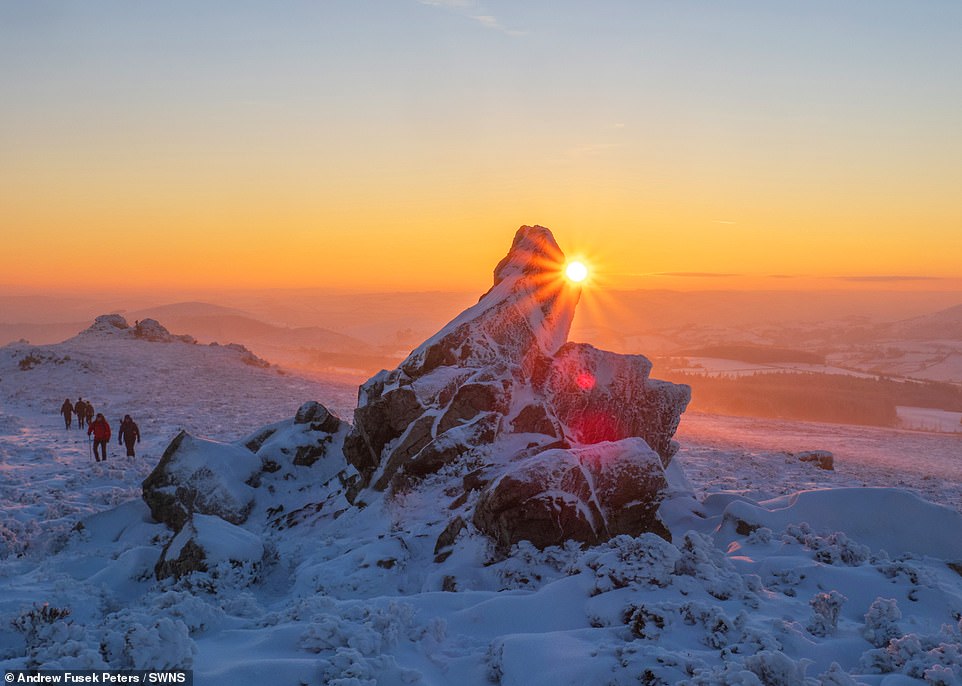 ‘This also means we are less likely to see the kind of windstorms and heavy rainfall associated with a strong jet stream that we experienced last winter.

‘When the polar vortex is strong, the jet stream is often strong – bringing a milder winter to the UK and often an increase in Atlantic windstorms.’

In the 2018 event, the Met Office issued a red snow warning, its highest level, meaning the weather could cause damage to buildings and roads.

Insurers AA estimated that more than £10 million of damage was done to cars in just three days as the Beast from the East pounced on the UK’s roads.

There were sixteen specifically weather-related deaths, although official data found that the extreme weather event may have increased mortality rates to the highest level since 2009.

The freezing conditions left passengers on train in Lewisham, east London, stranded for over four hours, and even set back the growth of Royal Jersey potatoes by three weeks.

However it is not yet known whether Britain will be hit by the same harsh conditions as 2018, which Met forecaster Craig Snell said were a ‘perfect storm’.

‘It takes a good few weeks for it (the SSW) to have an impact at the earth’s surface so we can’t say for sure yet what it will do to UK weather,’ added Craig.

‘There is an increased chance of blocking the usual weather pattern of the UK but it will depend on where we are on that blockage – north or south – whether we will see similar weather to 2018.’ 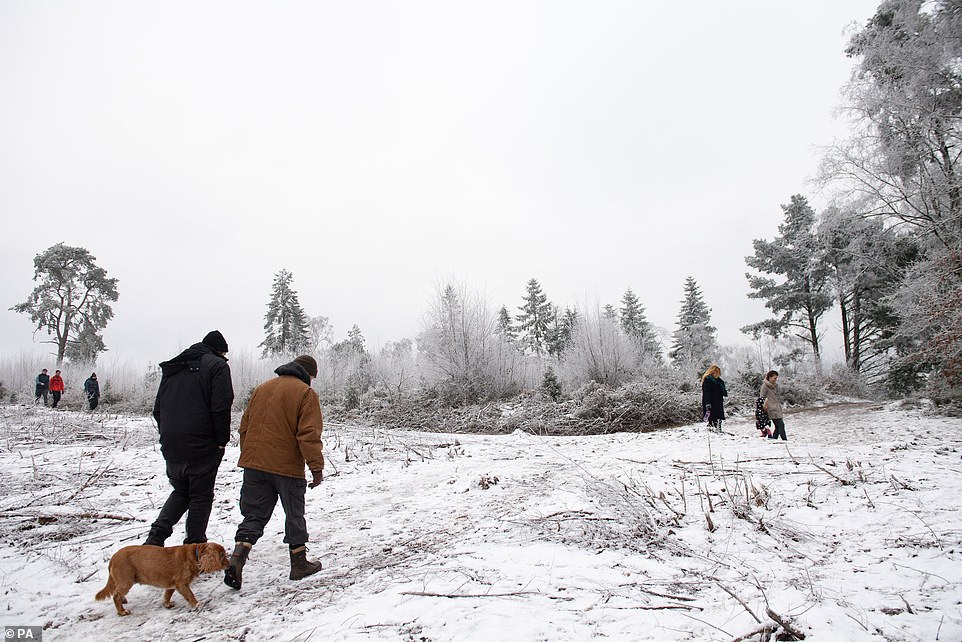 Meteorologists have confirmed that a sudden stratospheric warming (SSW) event is developing high above the Arctic, the same phenomenon which caused the country to grind to a halt two years ago. Pictured: People walking through snow and icy conditions at Lickey Hills Country Park in Birmingham 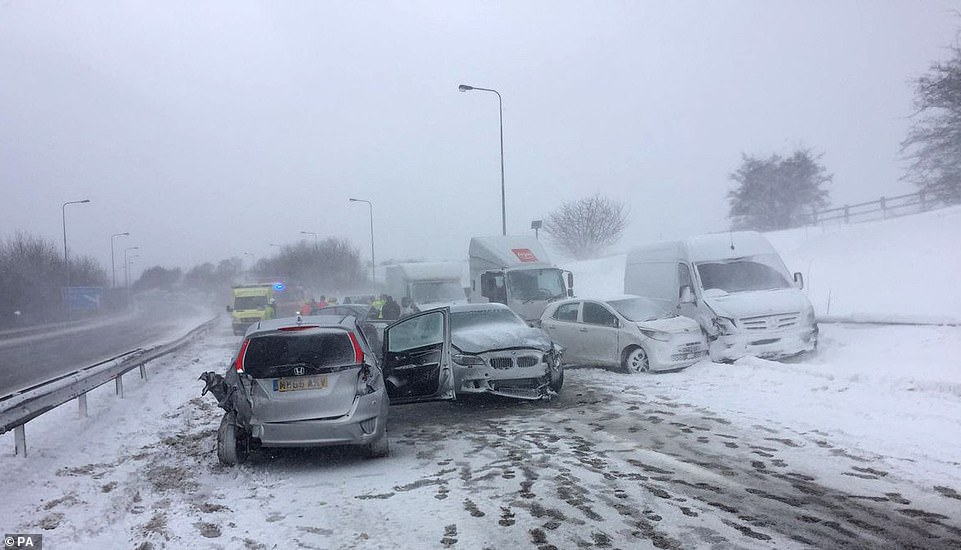 Insurers AA estimated that more than £10 million of damage was done to cars in just three days as the Beast from the East pounced on the UK’s roads. Pictured: Manchester Fire and Rescue posted this picture of an accident on the M66 involving 16 vehicles in March 2018

Yesterday, freezing fog settled across London and parts of the south east after temperatures dropped well below freezing overnight – as a weather warning for ice continued over parts of Britain.

Temperatures dropped as low as -12C in Scotland on Saturday, with Brighton recording overnight temperatures of -3C, and London seeing the mercury fall to -2C.

It comes after a week of snow and ice for large parts of the country – with a Met Office weather warning still in place.

Most of Scotland and northern England were warned to take care on the roads due to ice, with the Met Office warning freezing temperatures could cause ‘some injuries from slips and falls’.

George Floyd: US braces for trial of police officer over killing – live updates | US…

She Was Imprisoned for Killing Her 4 Children. But Was It Their Genes All Along?

She Was Imprisoned for Killing Her 4 Children. But Was It…