SpaceX Inspiration4 mission: Who are the civilian astronauts, what are their roles and how will they land? | Science & Tech News 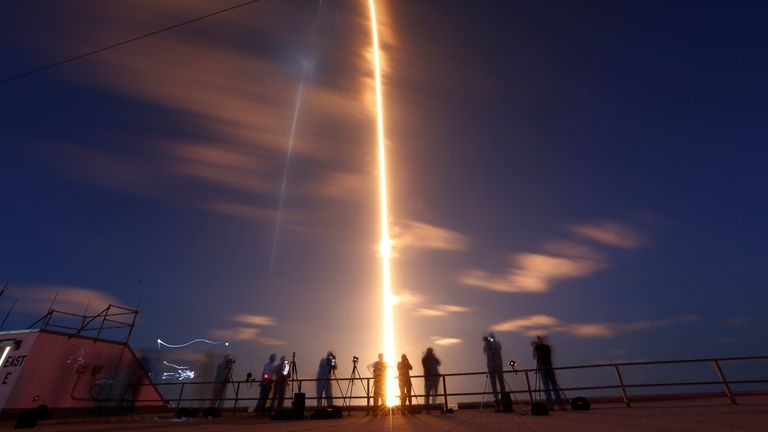 Four amateur astronauts are due to spend about three days in orbit in a world first, after they blasted off from the Kennedy Space Centre in Florida on Wednesday evening.

The Inspiration4 mission, backed by SpaceX, was organised by entrepreneur Jared Isaacman, who is also one of the passengers.

They are the first all-civilian crew ever to circle the Earth from space.

During their trip, those on board will carry out a series of science experiments before returning home.

So who are the four people on board, how did they get there and what will happen in the next 72 hours or so.

Who are the amateur astronauts?

Mr Isaacman is the man behind the mission, and paid an undisclosed sum to get the project off the ground.

The 38-year-old made his money with a payment processing company – like SpaceX head Elon Musk – and now also operates a private air force.

An experienced pilot, he wants the journey to raise awareness for St Jude’s Children’s Research Hospital in Memphis, Tennessee.

The other three members of the crew were selected according to Mr Isaacman’s conditions.

Hayley Arceneaux, 29, is an employee of St Jude’s, and had cancer during her childhood.

Taking someone from the hospital was a condition from Mr Isaacman.

Ms Arceneaux, a physician’s assistant, is the first person to travel to space with a prosthesis – part of her right femur was replaced by a metal rod during a bone cancer battle at the age of 10.

Dr Proctor, 51, is an entrepreneur and trained pilot herself.

She won her seat through a competition based on a set of business-related tasks.

The scientist previously applied for NASA‘s astronaut programme but was unsuccessful – but is now in space.

Last up is Chris Sembroski, 42, a US Air Force veteran who now works for Lockheed Martin.

He was selected from a lottery of people who donated to St Jude’s – a competition which received around 72,000 entries.

What are their roles?

The four space tourists have defined roles, according to their backgrounds.

They have been branded leadership, hope, prosperity and generosity.

Mr Isaacman is leadership, and he will be the mission commander in charge of the operation.

Hope is Ms Arceneaux, who will act as medical officer and will help with experiments being carried out – many of which are medically based.

Dr Proctor is prosperity and the mission pilot. She will support Mr Isaacman.

Generosity is represented by Mr Sembroski, who is the mission specialist and will help “manage payload, science experiments, communications to mission control and more”.

What will they do?

Most of the experiments being carried out by the crew are “to increase humanity’s knowledge on the impact of spaceflight on the human body”.

SpaceX, the Translational Research Institute for Space Health (TRISH) at Baylor College of Medicine in Houston, Texas, and the Weill Cornell Medicine in New York City will analyse the data collected.

What experiments will they do

How is the ship controlled?

The crew are aboard a Dragon capsule, a reusable pod developed by SpaceX.

It can seat up to seven people, and has been to the International Space Station 25 times – 10 of which were repeat journeys.

It is capable of carrying 365lbs (166kg) of cargo, which is being used for scientific equipment and crew essentials on this journey.

Solar panels on the outside of the craft are used to generate power for the capsule and crew.

The vessel is largely automatically controlled, with a set of large touch screens instead of the traditional-looking dashboard of buttons, levers and toggles for the pilots to observe.

The pilots can also take control of the capsule with the touchscreens.

Sixteen Draco thrusters are used to direct the vehicle after it separates from the take-off rocket, and it has a set of parachutes for landing.

How are they getting back?

After the orbiting is complete, the capsule will head back to Earth.

According to the official plan, this will culminate in a “soft water landing” off the coast of Florida.

After re-entering our planet’s atmosphere, two “drogue” parachutes are deployed, before four main canopies are released.

The crew and vessel will then be retrieved from the water.