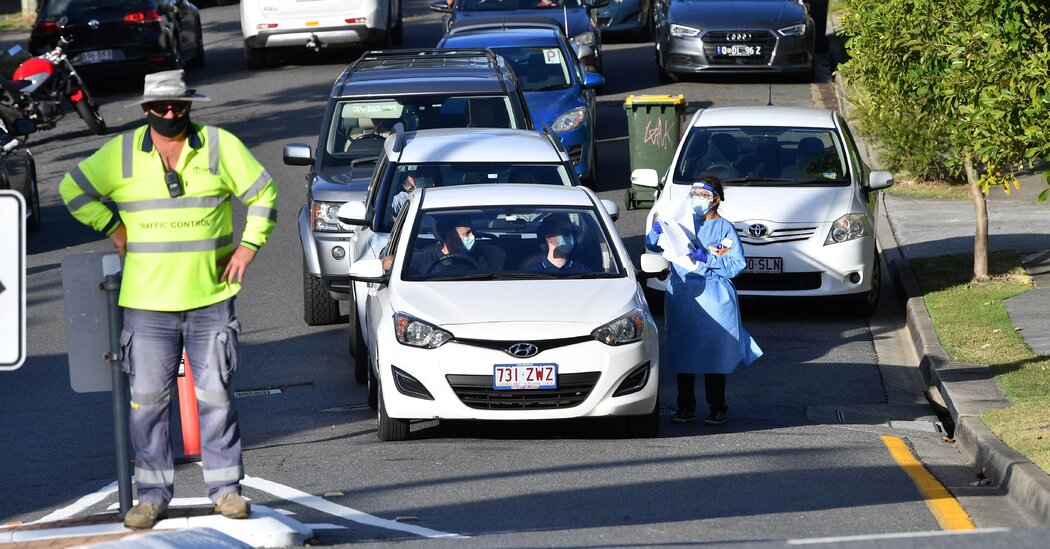 Countries across the Asia-Pacific region are scrambling to slow the spread of the more infectious Delta variant, reimposing restrictions and stay-at-home orders in a jarring reminder — for societies that had just begun to reopen — that the pandemic is far from over.

In Australia, outbreaks of the variant have forced four major cities — Sydney, Brisbane, Perth and Darwin — into strict lockdowns. On Monday, the Malaysian government said nationwide stay-at-home orders would be extended indefinitely. And Hong Kong officials banned flights from Britain, where cases of the Delta variant, which was first identified in India, are rising fast.

In Bangladesh, soldiers are preparing to patrol the streets to enforce stay-at-home orders, with new cases rapidly approaching their early April peak. “The Delta variant of Covid-19 is dominating,” said Robed Amin, a health ministry spokesman, adding that testing suggested the strain was responsible for more than 60 percent of new cases.

The lockdowns and restrictions have deflated hopes across the region, where many countries avoided the worst of the pandemic’s initial spread last year. Now, weary residents are frustrated by what some describe as their countries’ pandemic regression, as other parts of the world edge toward normalcy.

Outside Kuala Lumpur, Malaysia’s largest city, a restaurant owner, Marcus Low, bemoaned the fourth lockdown of the pandemic. Daily infections in Malaysia peaked in early June, but even after weeks of lockdown, new cases have dipped by only 5 percent over the past two weeks, according to New York Times data. Only 6 percent of the country’s 33 million people are fully vaccinated.

“My restaurant is known for its hospitality and shared dishes, the antithesis of social distancing,” Mr. Low said. For his and other small businesses struggling to survive, this lockdown “might be the last straw,” he said.

Others blamed slow vaccination drives for a return to restrictions.

“If we were able to get a really high vaccination rate, that changes the game completely,” said Hassan Vally, an associate professor in epidemiology at La Trobe University in Melbourne. With less than 5 percent of Australia’s population fully vaccinated, he said, “in some ways, where we’re at now is no surprise.”

The Delta strain is one of several “variants of concern” identified by the World Health Organization and the U.S. Centers for Disease Control and Prevention. Though estimates of its infectiousness differ, the variant could be 50 percent more contagious than the already faster-spreading Alpha variant, which emerged in Britain last year, health officials say.

Studies have shown that Covid-19 vaccines are still largely effective against the Delta variant, though protection is significantly lower for those who are partially vaccinated. But the experiences of several countries show that the Delta variant can spread rapidly through the unvaccinated, including children.

“Anywhere you carry out vaccination, the disease will be pushed into the unvaccinated population,” said Raina MacIntyre, a professor of global biosecurity at the University of New South Wales in Sydney.

Countries that have vaccinated relatively high percentages of their populations are moving ahead with reopening plans. In Britain, where the Delta variant now accounts for almost all new cases, officials say they still plan to lift most remaining pandemic restrictions on July 19. New cases there have more than doubled in the past two weeks, but officials believe that the country remains well protected, with nearly half the population fully vaccinated.

“While cases are now ticking up, the number of deaths remains mercifully low,” the country’s health secretary, Sajid Javid, said on Monday

Experts say that as long as the virus continues to circulate, it can acquire mutations that may present new challenges. In India, where a devastating second wave this spring caused thousands of deaths daily, Maharashtra state has reimposed partial stay-at-home orders in response to the emergence of what has become known locally as “Delta Plus,” described by scientists as a sub-lineage of the Delta variant.

Indian health officials have expressed concern that Delta Plus could spread even more easily. “There is the possibility of the third wave,” said Maharashtra’s chief minister, Uddhav Balasaheb Thackeray.