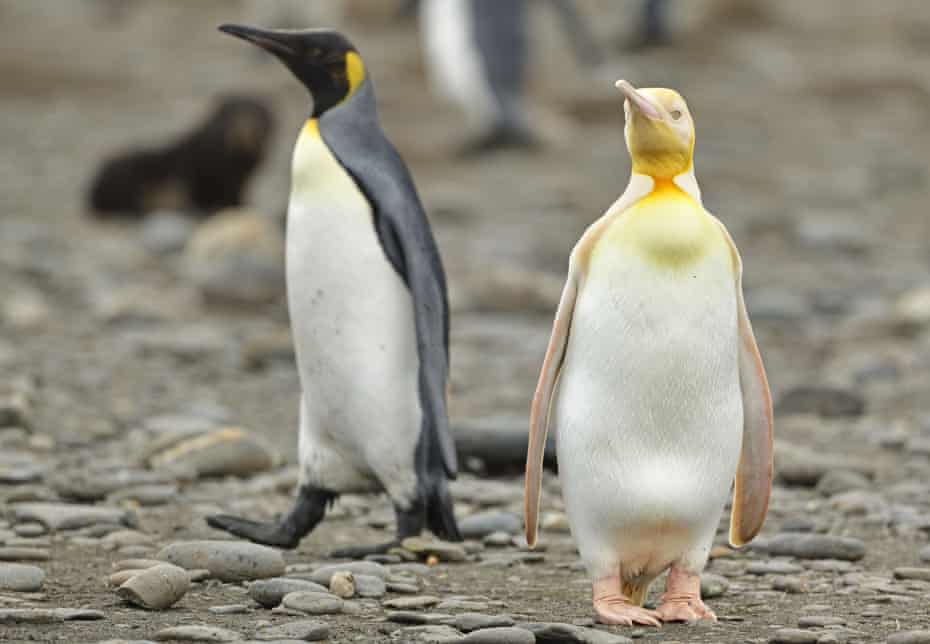 A pale yellow-feathered king penguin spotted among hundreds of thousands of animals crammed on to a beach in South Georgia has sent the nature-loving world into a frenzy.

Belgian photographer Yves Adams was on a two-month expedition to the Antarctic peninsula when he captured the unusually-coloured penguin.

The conditions on the remote South Georgia beach were “wild”, Adams said. Exposed, and in the middle of the South Atlantic Ocean, the swell of the water and the intensity of the wind made it difficult for his team to prepare a landing. In front of them was a 1km strip of beach, home to a “minefield of animals”.

“There are thousands of seals, and hundreds of thousands of penguins, so we were lucky to find a spot on land.”

He told the Guardian about the moment he spotted the unusual sight among the throngs of black and white king penguins.

“There was this group of penguins swimming by, from left to right. It was a beautiful sight, so I followed them from the corner of my eye.”

Suddenly noticing something yellow, he dropped his bags and picked up his binoculars to see “among the chaos of animals, a strange pale penguin”.

At the time, Adams and his colleagues didn’t know the breed of penguin. And so, out of curiosity, they continued to follow its movements.

“Groups of penguins were passing by. But the yellow penguin swam to shore just in front of us. It gave a little show – flicked water off its feathers, walked up the sand, and entered a colony of king penguins.”

The scene lasted less than a minute and Adams says he was “snapping away” the entire time.

Adams and his team could not easily get closer to the unusual penguin.

“The beach is filled with animals. We can’t walk through, or disturb the animals, or we’ll be eaten alive by seals. And you have to work quickly, watching 360 degrees around you the entire time.

“So we are lucky this bird decided to land where it did.”

His team initially attributed the colour mutation to being albino. Only later, in discussion with ecologists on the expedition ship, did they consider that the condition could be more complex.

His team contacted Hein van Grouw, curator at the UK Natural History Museum’s Department of Life Sciences, who said the penguin could be an “ino-bird” or a “similar mutation”.

A king penguin is usually black and white, with small tinges of yellow at their neck, giving them their signature tuxedo look. This hint of yellow “extends much further under the black than you can see,” van Grouw wrote.

Admiring it as a “beautiful creature indeed”, he explained that its “melanin has decreased so much and has become lighter in colour [so] you can see the yellow through it”.

Andre Chiaradia, research scientist from Phillip Island Nature Parks in Victoria, said he was “amazed” by the pale king penguin.

Chiaradia explained that just as humans can have melanin in excess or in deficiency, and it plays an important role in protecting us from the sun, it is also critical for penguins.

For the seabird, it plays two significant roles. The first is that it gives strength to their feathers.

“Penguins are flightless birds, and spend 80% of their time in the water, so it is crucial their feathers are waterproof and warm.”

Due to the nature of their movement, penguin feathers experience “wear and tear”, and so they lose and then regrow stronger feathers once a year in a process called moulting. Chiaradia fears this is a problem for the yellow-feathered penguin’s chance of survival.

“In the photos, I looked at the feathers around its flippers. There is high frequency movement there, and wear and tear is very high.”

Due to its lack of melanin, the yellow-feathered penguin’s feathers are weaker, and wear faster, but shed and regrow at the same rate as other melanin-sufficient king penguins.

“In the long term, this could be bad news for the seabird. I question whether its feathers will hold on until the next moult.”

The second function melanin serves for penguins has to do with the way they hunt for prey.

“Penguins sit on the surface of the water, with their heads under looking for fish. When they find fish to catch, they deep dive under. Dark penguins camouflage in the water, so the fish can’t see them.”

But the pale penguin will be easier to spot by its prey, and its hunting success rates are likely to be “much smaller”.

Chiaradia said the cause of its melanin deficiency was probably a “malfunction in genetic coding”. While it is a similar genetic malfunction to that found in albinism, Chiaradia and other biologists around the world, have said the yellow penguin’s condition is closer to leucism – which is a “partial rather than complete lack” of melanin.

Further genetic analysis of the penguin’s feather pigmentation would be needed to accurately attribute its rare coat to a specific condition.

Nonetheless, the penguin sighting has elicited global attention. Adams said that from the moment his photograph went online, it has been “surreal”.

He said his sighting was like “winning nature’s lottery”, and believes the yellow penguin will be his most popular photograph.

“That is unless I see a pink elephant. I could be lucky tomorrow, you never know.”

For Adams, “every king penguin and every moment photographing nature is beautiful and unique”, so he says the huge public response has been “weird and surreal”.

“For the past few days, my phone has not stopped ringing, or getting notifications from people reacting.”

“Parents and teachers are calling me, asking to speak at schools – it’s crazy.

“A guy in New York contacted me. He’s designed a yellow penguin abstract tattoo design. And people are sending me photos of this tattoo on them!”

Adams isn’t ruling out joining them.

“I don’t think yellow will be a very beautiful colour on my skin, but if I can get to New York someday, yep why not.”

Japan wildfire rages for 5th day, more households to be urged to evacuate