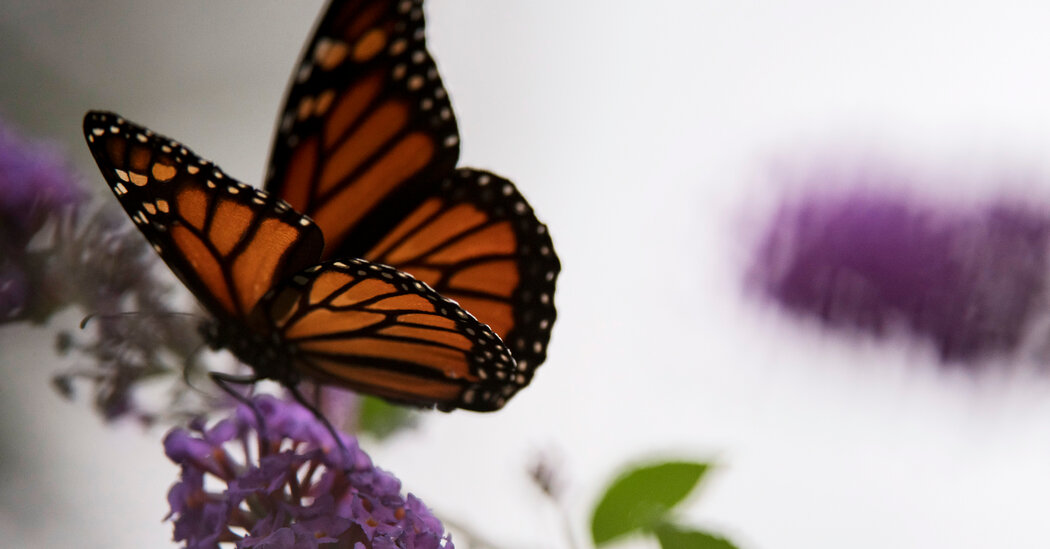 Every autumn, swarms of migrating monarchs descend on the mountains of central Mexico. It is the final stop on a journey of thousands of miles, as the butterflies travel from their North American breeding grounds to their winter colonies, where they blanket fir trees. Visitors who time their trips correctly might find the air so thick with monarchs that they can hear the butterflies’ wings beating.

“That’s bucket-list stuff,” said Andrew Davis, an ecologist at the University of Georgia, Athens. “Imagine being surrounded by gazillions of butterflies. It’s a magical experience.”

It is also one that may not last. In recent decades, the number of monarchs spending the winter in Mexico and overwintering sites in Southern California has plummeted, prompting concerns that the species might be at serious risk of disappearing.

But a new study, which focuses on the size of the summer breeding population, could complicate that picture. Although summer monarch abundance has declined in some areas, including parts of the Midwest, it has increased in others, the scientists found. Overall, across the entire North American range, abundance held steady or even increased slightly between 1993 and 2018, according to the paper, which was published on Friday in Global Change Biology.

The findings suggest that so far, monarch populations have been able to recover enough during the summer breeding season to make up for winter declines, the researchers say.

But not all scientists agree with that interpretation of the findings, which seem likely to fuel an ongoing debate about the threats monarchs face and the causes of the well-documented winter declines.

“There are some areas where monarch numbers are going up a little bit, but those aren’t the heart of the breeding range,” said Karen Oberhauser, a conservation biologist at the University of Wisconsin-Madison who was not involved in the new research.

The new study, she noted, documented a decline in monarch abundance in the Midwestern “Corn Belt” — an agricultural region that makes up a critical monarch breeding area. “The numbers are declining mostly in the Corn Belt,” Dr. Oberhauser said. “That’s where most of the monarchs are.”

North America is home to two populations of monarchs. The larger, Eastern population spends its summers breeding in milkweed-filled fields along the East Coast and the Midwest before winging its way down to Mexico each fall. A smaller, Western population generally converges on California each autumn.

Numerous studies have found that the size of these winter colonies has fallen precipitously since the mid-1990s. “They’re a mere shadow of their former self,” said Jeffrey Glassberg, president of the North American Butterfly Association and an author of the paper.

These declines have been attributed to a variety of factors, including climate change and logging near the overwintering sites.

The losses have also coincided with the increasing use of an herbicide known as glyphosate across large swaths of the butterfly’s Midwestern breeding range. The herbicide kills milkweed, which often springs up in corn and soybean fields and plays a critical role in the monarch life cycle; adult butterflies lay their eggs on the plants, which serve as the sole source of food for the caterpillars. Use of the fertilizer increased sharply during the 1990s and early 2000s.

The winter declines have prompted campaigns to encourage the public to plant milkweed, as well as concerns about the monarch’s future. In December 2020, the U.S. Fish and Wildlife Service concluded that the butterfly qualified for federal protection but that other threatened and endangered species were a higher priority for the agency.

However, overall population trends, across the monarch’s entire range and annual migratory cycle, have been more difficult to determine.

The new study was led by Dr. Davis and Michael Crossley, an entomologist at the University of Delaware. They and their colleagues leveraged data collected as part of the North American Butterfly Association’s annual summer butterfly count, in which volunteers tally the number of butterflies they observe in defined areas.

The scientists analyzed more than 135,000 monarch observations at 403 sites, limiting their analysis to locations that had data spanning at least a 10-year period between 1993 and 2018. They adjusted the tallies to account for how many hours volunteers spent on the task, and then modeled the relative abundance of monarchs over time.

The scientists found evidence of summer population declines in the Southwest, Northeast and the Corn Belt. But in the Upper Midwest, as well as in the Northwest and Southeast, monarch abundance appeared to increase over time. Across all the sites together, relative abundance increased by about 1.36 percent annually, the scientists calculated.

“The monarchs in the summer are doing fine,” Dr. Davis said.

So what explains why winter monarch colonies have contracted? It’s not yet clear, Dr. Davis said, but one possibility is that the warming climate means fewer monarchs are making a seasonal migration. It’s also possible that fewer monarchs are surviving their southward journeys, for reasons that could be anything from an increase in car strikes to rising rates of infection with a parasite that reduces migration success.

“There’s a number of natural and anthropogenic threats to the fall migration that could be increasing over time,” Dr. Davis said.

Leslie Ries, an ecologist at Georgetown University, praised the paper’s broad sweep. “The geographic scope of their analysis is bigger and more comprehensive than anything I’ve seen,” she said.

But she said it was not clear that population increases in some areas of the country could completely offset declines in important breeding grounds, like the Midwest.

Dr. Oberhauser also noted that previous research had shown that during the latter part of the study period, the monarch population in Mexico essentially stabilized at a new, lower level. So at sites that had data only from the most recent decade, the researchers might have missed the population decline, she said.

“I think it would be a mistake to conclude that it doesn’t matter what we do in the breeding ground,” Dr. Oberhauser said. “It’s important to conserve habitat over all phases of the annual cycle. We know that every single phase has to work in order for the monarch migration to survive.”

Dr. Davis and his colleagues also used federal data to estimate how much glyphosate was being used in the area around each survey site. They found that in some regions, especially in parts of the Midwest, glyphosate use was associated with declines in abundance.

But they also documented a countervailing force: climate change. In the northern part of the United States, increasing temperatures were correlated with increases in monarch abundance. This effect was especially pronounced in the Midwest, suggesting that the warming climate might have partly offset the effects of glyphosate in that region, Dr. Davis said.

In parts of the country that typically have warmer climates, however, increasing temperatures were correlated with declines in monarch abundance, consistent with previous research.

In recent years, as glyphosate use has leveled off, fluctuations in spring and summer weather have been the biggest predictors of summer population size, she and her colleagues found in a 2021 study. Although modest increases in temperatures in northern parts of the monarch range might be good for monarchs now, continued climate change and more extreme weather could spell trouble in the future, she said.

The findings do not suggest that monarchs face no threats, the researchers say.

“Those wintering colonies, they’re in trouble for a whole bunch of reasons,” Dr. Glassberg said. If the winter populations get small enough, the monarch population might not recover in the summer, the researchers noted.

But Dr. Davis said scientists should devote more attention to understanding and addressing threats that the monarchs might face on their southward migration — or even to other butterfly species, many of which are more threatened than the popular monarch.

With few easy answers, the debate over the threats that monarchs face seems destined to continue. “This has been a difficult issue,” Dr. Ries said. “Everybody in this community cares about monarchs, and we all are trying to figure out what’s going on.”