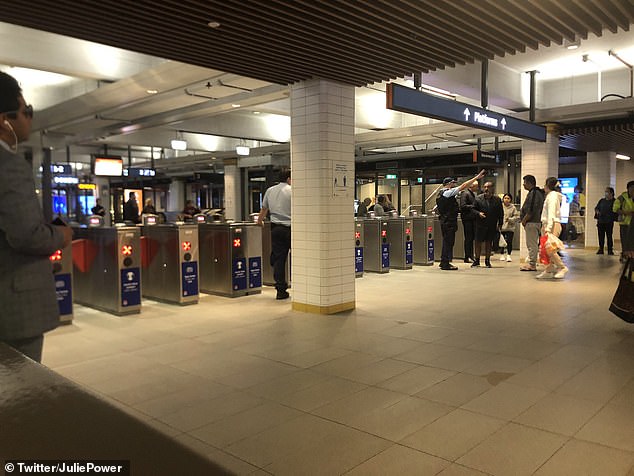 Sydney’s Town Hall train station has been evacuated and police are searching the area after reports of a ‘verbal threat’ and a ‘suspicious package’.

‘A police operation is underway at Town Hall Station with a precautionary search of the area underway,’ NSW Police tweeted.

Commuters were evacuated about 11am on Wednesday.

All trains have been stopped from travelling through the station, the second busiest in Sydney, causing major delays to the city’s rail network.

Sydney’s Town Hall train station was evacuated about 11am on Wednesday after a ‘suspicious package’ had been reported to authorities. Pictured, police at the station

No trains are running through the station, leading to major delays on Sydney’s train network

‘Due to a major police operation at Town Hall Station, no trains are travelling through Town Hall. Major delays are expected on some lines. Trains are also suspended between Town Hall and North Sydney on the North Shore Line,’ Sydney Trains posted on Twitter.

One commuter reported being on a train that was ‘stopped underground in tunnel between Central and Town Hall station’, which they said was ‘apparently getting approvals to go “back” to Central’.

Travellers evacuated from the station, or arriving at the station due to catch a train, have been told to take a bus.

Desperate search for missing Melbourne girl, 14, who was last seen over 24 hours ago