Texas begs for help as 10,000 migrants camp in squalid conditions under US-Mexico bridge | US News 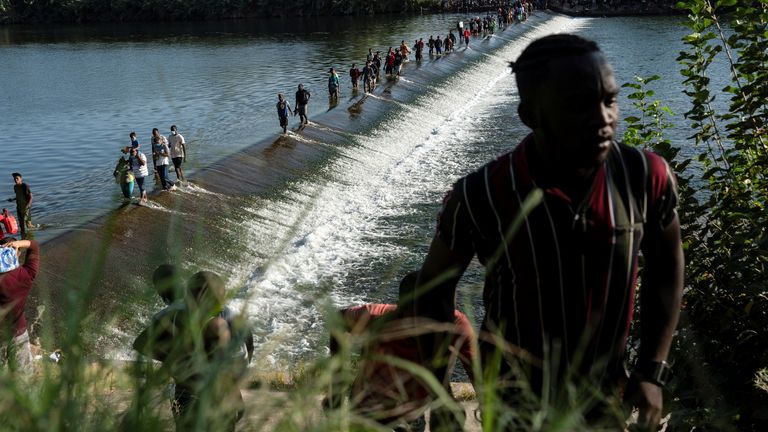 Migrants have camped out under a bridge in a remote American town dividing Texas and Mexico – as the US border force attempts to process thousands of asylum claims.

On Thursday, Del Rio Mayor Bruno Lozano said 10,503 migrants were under the bridge and called on the federal government’s help.

In a video posted on social media, Mr Lozano said: “The border patrol is so overwhelmed by the influx of migrants. We have about 2,000 to 3,000 at any given moment in detention.

“This is something that really needs to be brought to light, we need quick action from the administration. We need quick attention to this. We need a response in real time.”

The majority of the migrants are from Haiti, which was devastated by a 7.2-magnitude earthquake in August that displaced tens of thousands of people and killed more than 1,400.

People from Cuba, Venezuela and Nicaragua have also made the journey.

Temperatures have risen to 37C (99F) in Texas and hundreds of migrants were seen wading through the Rio Grande river and back into Mexico to stock up on essentials.

This is the latest challenge for Joe Biden’s administration, with border arrests nearing 20-year highs.

US authorities arrested more than 195,000 migrants at the Mexican border in August, according to government data released on Wednesday.

Ernesto, a 31-year-old Haitian migrant, slipped back into Mexico on Thursday to buy water and food for the fourth time.

He declined to give his surname and said he and his three-year-old daughter had not been fed at the camp.

“But now money is running out,” he added.

Border Patrol said in a statement it was increasing staffing in Del Rio to facilitate a “safe, humane and orderly process”.

Drinking water, towels and portable toilets have been provided while migrants wait to be transported to facilities, it added.

Mr Biden has rolled back many of the immigration measures that were implemented under Donald Trump’s presidency.

But some Democrats have criticised him for not doing more to help migrants, and opponents say his policies have encouraged illegal immigration.

Del Rio is in Val Verde County and voted for Trump in 2020.

Both migrants and Mexican officials said many more people are expected in the coming days.

Jeff Jeune, a 27-year-old Haitian said he and his young family were exhausted, hungry and sleeping on the ground.