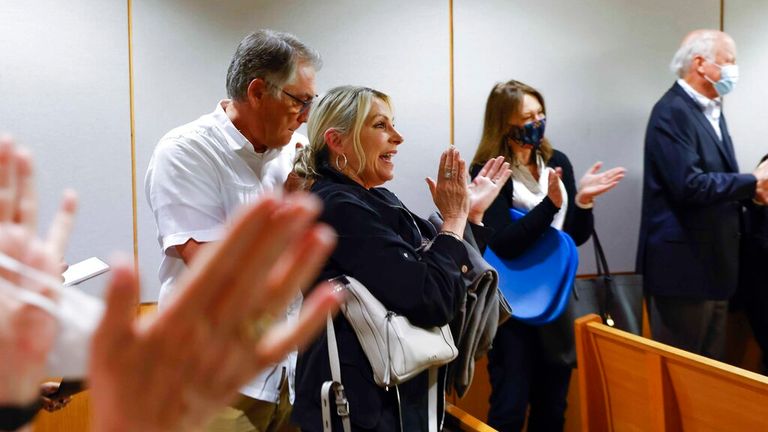 An alleged serial killer in Texas has been jailed for life after being found guilty of murdering an 81-year-old woman.

Jurors deliberated for 45 minutes before convicting Billy Chemirmir, of smothering Lu Thi Harris in March 2018, who he had met at a Walmart supermarket.

He went to her home, killed her and stole her jewellery, prosecutors said.

The 49-year-old – who is charged with killing 18 women over a two-year period – was convicted of the pensioner’s murder and sentenced following a retrial.

Prosecutors did not seek the death penalty so state District Judge Raquel “Rocky” Jones sentenced Chemirmir to life in prison without parole.

Chemirmir, who has maintained his innocence, is charged with murdering 12 other women in Dallas County and five in nearby Collin County. There are plans to try him for at least one of the other deaths.

Relatives of those he is accused of killing praised Thursday’s verdict at an emotional news conference after the court hearing.

“This one conviction represents justice for all of the families,” said Shannon Dion, whose 92-year-old mother, Doris Gleason, was killed in 2016.

Chemirmir’s lawyer Kobby Warren told the court prosecutors had not been able to prove beyond reasonable doubt that his client was ever at the victim’s home, saying the state’s case was “all bark, no bite” – a point challenged by prosecutor Glen Fitzmartin.

“This is an easy decision,” said Mr Fitzmartin, who noted that when Chemirmir was arrested, he was in possession of Ms Harris’s jewellery as well as the keys to her home.

Jurors were also shown CCTV footage of Chemirmir and Ms Harris at the Walmart on the day she was found dead.

Chemirmir did not give evidence, nor did the defence team call any witnesses.

Jurors also heard about an attack on another woman – 91-year-old Mary Annis Bartel, who survived – the day before Ms Harris was killed, and the death of 87-year-old Mary Brooks about six weeks earlier.

Ms Bartel died in 2020, but jurors heard taped sworn evidence from her, in which she said a man forced his way into her apartment and “slammed” a pillow to her face and used “all his weight to keep me from breathing”.

She lost consciousness and later discovered she was missing her wedding band, diamond engagement ring and other jewellery.

A report a few days before the attack of suspicious behaviour at the independent living complex where she lived, and a licence plate number, led to Chemirmir’s arrest.

Detectives said they saw him throw items in a bin, and as they got him out of his vehicle, he was holding jewellery and cash.

They found in the bin a large red jewellery box that contained documents that led them to Ms Harris’s home, where they found her dead in her bedroom, with lipstick smeared on her pillow.

The number of people Chemirmir is accused of killing grew as authorities reinvestigated deaths previously thought to be natural.