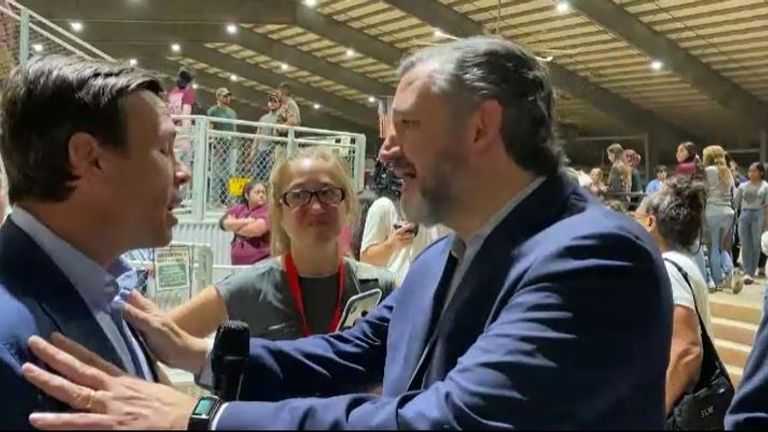 US actor Matthew McConaughey has delivered a moving and powerful address at the White House on the need for “responsible” gun legislation.

His emotional appearance followed the shooting in Uvalde, Texas, last month, of 19 students and two teachers at the Robb Elementary school – one of America’s worst school shootings.

Gun owner McConaughey, who was born in Uvalde, appeared to hold back tears and choke up, as he held photos of some of the child victims and talked about their families, what they were wearing on the day they were shot, and what they wanted to be when they grew up.

In the White House press briefing room, the Hollywood star described how he and his wife Camilla had spent the past week with the grieving families and spoken at length about their loss – and the need for “making these lives matter”.

He went through a brief biography of each victim, at one point slamming his fist on the lectern in seeming frustration at the loss of life.

High school dropout Salvador Ramos went on a murderous rampage at the school with an assault rifle. He was eventually killed by law enforcement.

And while acknowledging Americans’ Second Amendment right to bear arms, McConaughey said he believed that constitutional right did not mean there could not also be effective gun control legislation.

This included, he said, more background checks, limiting the sale of certain high-powered weapons, introducing so-called ‘red flag’ laws that highlight people with mental health or extremist issues attempting to buy guns, and raising the minimum aged to purchase AR-15s like the one 18-year-old Ramos used, to 21 years.

“These are reasonable, practical, tactical regulations,” he said. “These regulations are not a step back, they are a step forward for a civil society and for the Second Amendment.”

He added that every parent of every victim had told him and his wife they wanted their “children’s dreams to live on…to continue to accomplish something after they are gone” which had been his impetus to speak.

Everyone he had spoken to, “families of deceased, mothers, fathers, Texas rangers, hunters, responsible gun owners”, he said, had been united: “They all said we want responsible gun laws that won’t make it so easy for the bad guys to get these damn guns.”

President Joe Biden‘s administration has called on Congress to pass gun control measures in the wake of both the Uvalde killings and a separate, racist attack, also in May, at a supermarket in Buffalo, New York, that left 10 people dead.

But historically, gun control laws have been very difficult to pass in an evenly politically-divided Congress – as the issue tends to be voted on almost entirely Republican versus Democrat.

McConaughey also said: “We have got to take a sober, honest and humble look in the mirror.

“We have got to get some real courage and honour our immortal obligations – instead of our party affiliations.

“Enough of the counter-punching, enough of the invalidation of the other side. Let’s find a middle ground – the place where most of us Americans live anyway – especially on this issue.

“Maybe set an example for our children give us reason to tell them…these are great American leaders right here I hope you grow up to be like them.

“We can’t truly be leaders if we are only living for re-election.”

Read more:
Why do US gun sales increase after mass shootings?
Maps reveal scale of gun violence in America
Is America too deeply divided to deal with its gun problem?

His appearance came a day after McConaughey, known for his roles in films like The Wedding Planner and Dallas Buyers Club wrote an op-ed in the Austin American-Statesman entitled It’s Time to Act on Gun Responsibility.

In it, McConaughey said US legislators should understand there was a difference between gun “control” and “responsibility”.

“I believe that responsible, law-abiding Americans have a Second Amendment right, enshrined by our founders, to bear arms. I also believe we have a cultural obligation to take steps toward slowing down the senseless killing of our children,” he wrote.

“There is no constitutional barrier to gun responsibility,” McConaughey continued. “Keeping firearms out of the hands of dangerous people is not only the responsible thing to do, it is the best way to protect the Second Amendment. We can do both.”