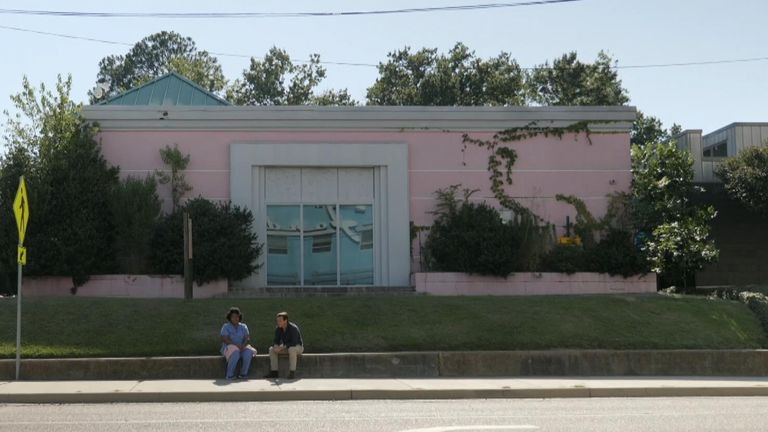 Beyond the protests at the last remaining abortion clinic for hundreds of miles, the patients have been arriving one after the other.

Deeply personal decisions are being made and procedures undertaken quickly before this choice becomes illegal in the state of Mississippi.

As the Jackson Women’s Health Organization closed for the day, we sat down with nurse Stephanie Battle.

She gave us an insight from inside.

“It’s been very chaotic. Phones have been ringing. Everybody’s all over the place. We’re trying to remain calm because we already knew this was going to happen.

“But it’s hard to keep your composure…”

She says: “We have people crying. They’re fragile, they’re hurting. These patients are hurting.

“This is very, very sad to see and to hear them crying on the phone because they can’t have an abortion in the state of Mississippi.”

I ask about how busy it’s been over the weekend.

‘Everybody’s panicking. Even the men are panicking’

Is there a sense that patients are in a hurry, panicking?

“They’re calling because they’re trying to figure out what is going on. So, yes, like this is very scary for the women in Mississippi, Texas, Louisiana, just everywhere this is going on.

“Everybody is very, very worried. I can see the despair on their face. I’m trying to keep them calm, like, ‘hey, it’s going to be okay. Other places, you know, you may have to travel’.”

Once this clinic closes, the next nearest one for many southern women will be hundreds of miles north, in Illinois.

Stephanie said: “I feel like it is being ripped away from us by not even having the choice to say ‘hey, this is what I want to do. This is my choice’.

“I feel bad for the generation just coming up… when you’ve been doing something for so long and now you can’t do that anymore.”

‘It’s all a game for the legislators’

What message does she have for the Supreme Court justices who made this decision, I ask?

“I feel like these people do not care about these women coming into the clinic. They’re just: ‘Oh, you’re killing your baby’.

“This is how the state of Mississippi is handling women’s reproductive care. It’s sad. It’s all a game for the legislators, all those people, the governor.

“It’s a game for them to say that they won. That’s all they want to say: ‘We won’ instead of really looking into women’s health.

“The patients are suffering because they want to win this political game.”

Stephanie revealed that she and the other staff at the clinic receive regular hate calls and death threats from anti-abortion activists. ‘They are murdering babies’

And for the future, her assessment is bleak.

“I can only imagine what’s going to be happening. My heart is so sad because l can only hear the phone calls that we get now about what they’re going to do.

“I just hope they don’t take matters into their own hands and just go about it the proper way and safe way to get it done.

“So, yeah, it’s a hard pill to swallow, but we’re going to do everything that we can to help these ladies.”