Thousands of Aspen residents were left without heat for two days 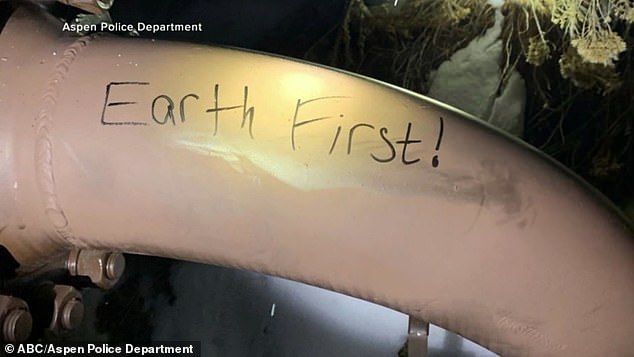 Thousands of Colorado residents were left without heat for two days after vandals ‘intentionally’ tampered with natural gas service lines in Aspen as temperatures are forecast to plunge to 2 degrees Tuesday night.

Officers from the Aspen Police Department said that the FBI has joined a criminal investigation into the vandalism of the service lines that occurred on Sunday after the words ‘Earth First’ were found on one of the affected pipes.

Authorities are now looking into the Earth First environmental group to see if members of the organization were involved.

Black Hills Energy said technicians have been going door-to-door ‘to safely facilitate necessary repairs’ and turn off the approximately 3,500 impacted gas meters in the city.

According to the National Weather Service, temperatures are expected to plummet to 2 degrees in Aspen on Tuesday night. A storm is also forecast to bring up to 8 inches of snow in the Rocky Mountains area this week.

Thousands of Aspen residents were left without heat after vandals ‘intentionally’ tampered with natural gas service lines. Authorities are looking into the environmental group Earth First after the name was scrawled on one of the affected pipes 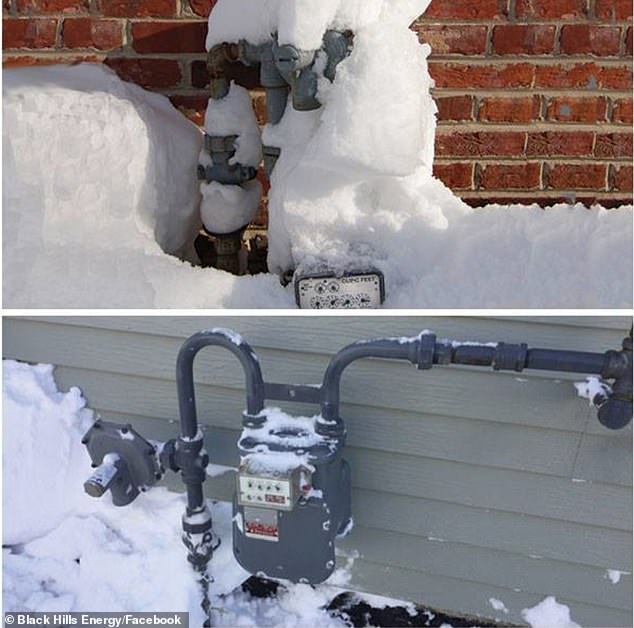 Residents were asked to clear the snow from their meters to assist technicians during the relight process. Technicians had to go door-to-door to restore the heat to approximately 3,500 homes and businesses

‘This is step one in the multi-step process. After making repairs and re-pressurizing the system, service will be restored to impacted residents and BHE techs will relight customers,’ Aspen police said in a statement on Facebook.

Officials warned residents to ‘not attempt to relight appliances’ on their own.

Aspen police said Monday that three separate Black Hills Energy gas line sites were tampered with by vandals. One of those gas lines is located in Aspen and two are located in Pitkin County.

Aspen Assistant Police Chief Bill Linn said that the vandals had ‘some familiarity’ with the gas system.

‘They tampered with flow lines. They turned off gas lines,’ Linn said.

He also said that investigators recovered physical evidence from the scene, including footprints left in the snow.

Linn said there were no security cameras at the three impacted locations. Linn also said that the FBI’s critical infrastructure protection unit is helping with the investigation.

Pitkin County Commissioner Patti Clapper told the Aspen Times that it seems like ‘an act of terrorism’. 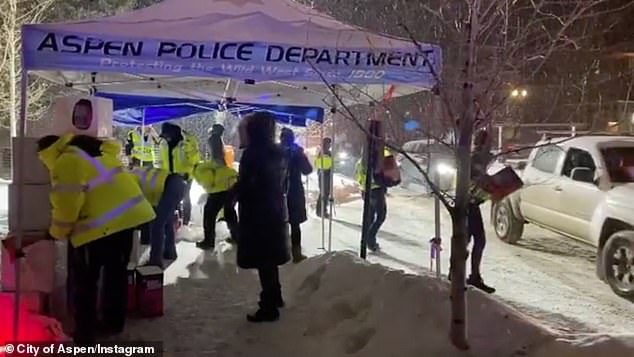 On Monday night, the City of Aspen Instagram account shared video of officers from the Aspen Police Department distributing space heaters to residents affected by the natural gas outage 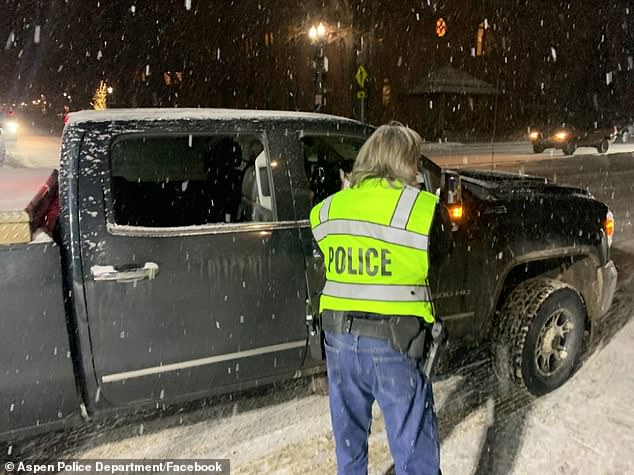 Cars were seen in the video lined up as officers handed residents the heaters while it snowed in the city. The city’s fire department was also distributing space heaters to residents. Both departments distributed about 6,000 heaters

‘It’s trying to destroy a mountain community at the height of the holiday season. This wasn’t a national gas glitch. This was a purposeful act. Someone is looking to make a statement of some kind,’ she added.

However, Pitkin County Sheriff Joe DiSalvo said Monday that he didn’t think it was an attack.

‘I know that word has been thrown around a lot,’ he said. ‘It’s not a word I would use.’

He said it was ‘an intentional act’ to disrupt gas service to Aspen, according to the Aspen Times.

Authorities said that at locations where no one is home or the business is closed, employees left a tag on the door to notify the customer that the natural gas has been shut off and with instructions to call the company to have it turned back on.

‘Because of extreme temperatures, Aspen residents are encouraged to contact their neighbors who may be out of town,’ officials said.

‘Please ask them to call Black Hills Energy’s customer service so the company can check their home or building to make sure they have service so water pipes don’t freeze,’ the statement continued.

Officials warned that if any customer smells natural gas, ‘they should leave their home immediately and call 911’ and then Black Hills Energy’s emergency service line from a neighbor’s home or from a cell phone at 888-890-5554.

‘Don’t use the phone in the house where you smelled gas or turn off any lights as you leave. If there is gas in the house, a spark of any kind could ignite it and cause serious property and personal injuries,’ officials said.

‘Beginning this evening until 11 pm, some customers will see BHE employees at their door to ensure safe delivery of natural gas,’ officials said.

On Monday night, the City of Aspen Instagram account shared video of officers from the Aspen Police Department distributing space heaters to residents affected by the natural gas outage.

Cars were seen in the video lined up as officers handed residents the heaters while it snowed in the city.

The city’s fire department was also distributing space heaters to residents. Both departments distributed about 6,000 heaters.

According to Black Hills Energy, crews began the relight process for their most critical customers beginning Monday night and into Tuesday morning.

‘We were able to begin relighting our most critical customers overnight, and the techs are now beginning to relight all customers. Please try to clear a path and remove any snow from your meter to assist our techs during the relight process.

BHE said that more than 160 technicians helped through the entire process.

COVID-19: US ‘falling far behind’ on vaccines as case of new variant found in Colorado, Biden warns | US News