By Lauren Aratani in New York and agencies Last updated May 3, 2021 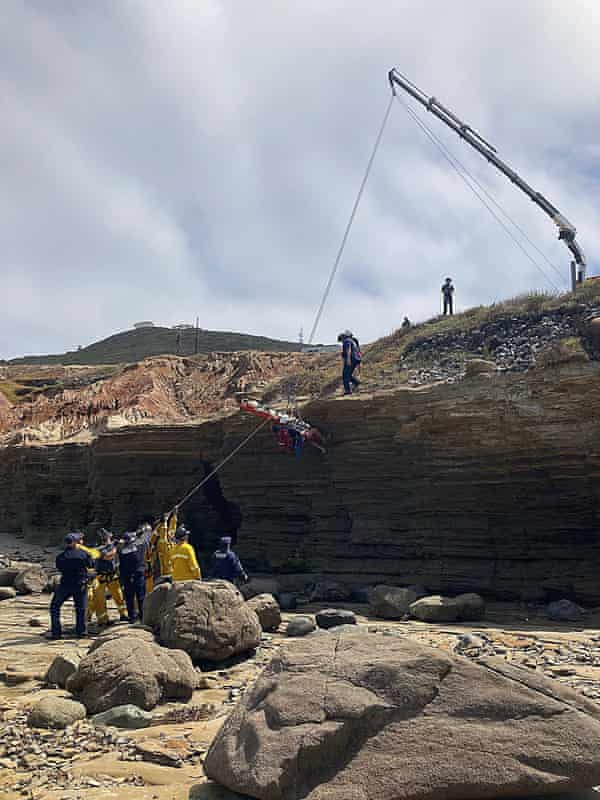 The US coast guard has ended its search for survivors after a boat capsized off the coast of San Diego, leaving three people dead and dozens injured.

Officials believe the boat, which had at least 30 people onboard, was being used to smuggle migrants into the US and the man who was captaining the vessel has been taken into custody.

The coast guard was contacted early on Sunday by a commercial boat that was witnessing the vessel overturning on rocks off the shore of the Point Loma peninsula in southern California.

Footage from people on the shore show the small boat being tossed by the waves and people trying to swim to shore. Officials described the vessel as a “40ft trawler-style boat” .

The crash left a “large debris field” of broken wood in the water on Sunday, according to the local fire department.

Rick Romero, a San Diego lifeguard lieutenant, said at a press conference on Sunday that by the time officials arrived on the chaotic scene, “the boat had been basically broken apart”.

“There were people in the water drowning, getting sucked by the rip current,” Romero said, adding that officials were conducting CPR resuscitation on multiple people on the shore.

Other injuries sustained by the victims range from hypothermia to wounds from the boat’s capsizing. Weather conditions made it difficult for rescuers to reach people in the water, with choppy waves and at least 7ft swells off the shore.

The vessel had the hallmarks of a smuggling attempt from Mexico gone awry, though authorities stopped short of confirming it. Kelly Thornton, a spokeswoman for the US attorney’s office in San Diego, declined to comment after the captain was taken into custody, saying prosecutors were “carefully reviewing the matter”.

US Customs and Border Protection (CBP) believes the boat was a “smuggling vessel used to smuggle migrants into the United States illegally”, Jeff Stephenson, a supervisory border patrol agent, said at a press conference.

CBP has not confirmed the nationality of those who were onboard the ship nor have authorities released any identifying information about those who did not survive the boat’s wreck.

Mexico’s foreign secretary said there were 25 men and eight women aboard, the majority of them Mexican citizens.

Smuggling has become a booming business as migrants pay for transportation across the US border, which often requires crossing areas that are considered the territory of drug cartels. The capsizing is one of several recent incidents that highlight the often perilous conditions that migrants face as they attempt to enter the US with smugglers.

In March, a tractor-trailer slammed into an SUV carrying 25 passengers in southern California, killing 13 Mexican and Guatemalan citizens.

And in February, authorities received a chilling 911 call from a migrant who reported being trapped in a tanker truck in San Antonio, Texas, with 80 other people, struggling to breathe.

Just two days before Sunday’s incident, CBP announced it would ramp up operations to intercept smuggling operations off the coast of San Diego after seeing “a dramatic increase” in the number of attempts to bring undocumented migrants to the US by sea.

Last Thursday, CBP disrupted a vessel holding 21 people, 15 men and six women who were Mexican nationals, off the coast of Point Loma. Two people on the boat will face federal charges related to smuggling, according to a press release.

Smuggling off the California coast has ebbed and flowed over the years but has long been a risky alternative for migrants to avoid heavily guarded land borders. Small boats with single or twin engines enter from Mexico in the dead of night, sometimes charting hundreds of miles north. Recreational boats, like the one that capsized Sunday, try to mix in unnoticed with fishing and pleasure vessels during the day.

Maritime apprehensions have been increasing “steadily” since October 2019, Stephenson said, rising 92% by September 2020.

“The smugglers, they don’t care about the people they’re exploiting. All they care about is profit. To them these people are just commodities,” Stephenson said.