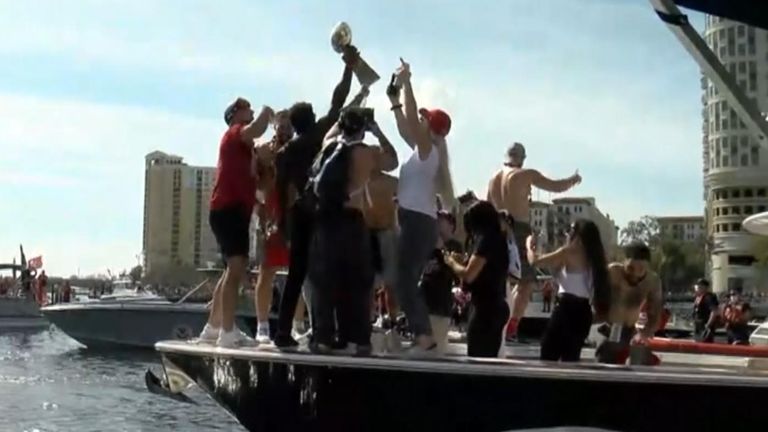 Tom Brady took to the water to celebrate yet another Super Bowl triumph – and the star quarterback clearly enjoyed himself.

The 43-year-old, who won a record seventh Vince Lombardi trophy at the weekend, joined his Tampa Bay Buccaneers teammates for a boat parade in Florida on Wednesday.

Brady, who was named the game’s Most Valuable Player (MVP), was seen at one point throwing the prize from his boat to another, prompting cheers from fans and players.

Footage captured him returning to dry land looking a little worse for wear and rather unsteady on his feet.

“Noting to see her…just litTle avoCado tequila,” Brady wrote on his Twitter account, including a video clip of the moment he stepped off his boat.

Brady, who is widely considered the greatest quarterback of all-time, is known for his strict plant-based diet.

He has credited it with allowing him to perform at a high level well into his 40s, an age at which many other quarterbacks have retired.

With the COVID-19 pandemic continuing, the Buccaneers opted for a novel way to celebrate what is their first Super Bowl win in 18 years and the second in the team’s history.

The franchise defeated the Kansas City Chiefs 31-9 in a dominant performance at their own stadium, the first time an NFL team has hosted a Super Bowl.

Thousands of fans lined the Hillsborough River near downtown Tampa on Wednesday, while dozens of people on private boats, kayaks and other watercraft took to the river to join in.

They were told to stay at least 50ft (15 metres) away from the boats carrying the players.