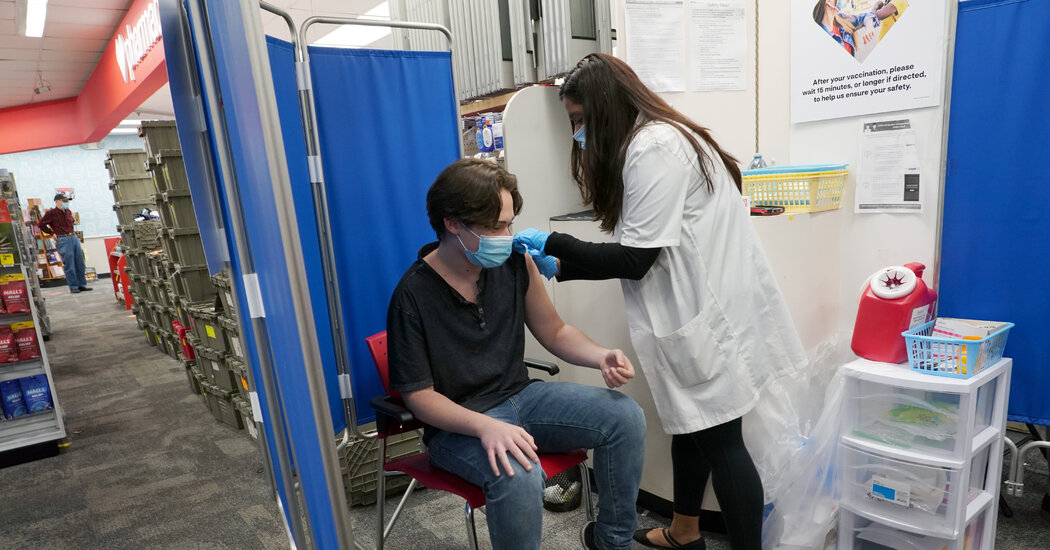 While the pace of vaccinations in the United States has slowed, the nation is getting closer to the July 4 benchmark set by President Biden as it makes progress inoculating adolescents and those living in underserved communities.

The biggest gains in recent weeks have been made in vaccinating 12- to 15-year-olds, who became eligible for shots earlier this month, according to a New York Times analysis of data. And there has been progress in reaching some groups, including Latinos and people without college degrees, with the highest rates of vaccine hesitancy, according to the Kaiser Foundation.

All of these factors, along with a shift in the national strategy, are keeping the United States on pace to reach Mr. Biden’s goal of having 70 percent of the adult population get at least one shot by July 4. So far, 62 percent of adult Americans are there.

Vaccinated Americans have been encouraged to enjoy a summer that would have seemed unlikely last year. Americans are flying at rates not seen in about a year, many with plans to mingle among large crowds at parades and barbecues this Memorial Day weekend, the usual start of the summer in the United States.

People who are on the fence about getting a shot are more likely to get one if it is as easy as walking into a local pharmacy without an appointment, said Dr. Taison Bell, a critical care and infectious disease physician at the University of Virginia. Shifting resources away from the mass vaccination sites at stadiums to mobile clinics is starting to pay off, he said.

“The folks who were wait and see have seen the positive benefits,” Dr. Bell said, as their friends and family restart activities many put on hold for nearly a year. Even if they don’t believe in vaccines they don’t want to miss out, he said. “People are a lot more motivated.”

About 166.4 million people have received at least one dose of a Covid-19 vaccine, according to the Centers for Disease Control and Prevention. The pace, though, has slowed to about 1.5 million doses per day on average, half of the 3.38 million shots that were reported on April 13.

In April, after the rate of vaccinations peaked, Mr. Biden announced plans to target resources at places with lower immunization rates, including underserved rural areas and communities of color.

And as demand for vaccines slowed, Mr. Biden made the distribution and use of the vaccine more flexible. A national stockpile was created that could send doses where they were most needed. Pharmacies could accommodate walk-ins without appointments, and shots could be obtained at local doctor’s offices and mobile clinics. Community leaders were enlisted to reach out to the vaccine hesitant.

There has been some success with efforts to reach predominantly Black and brown communities. Nearly 50 percent of vaccinations administered through the pharmacy program have gone to people of color in the last few weeks.

In New York City, where more than 60 percent of adults have had at least one shot, the city is targeting Black and Latino residents, whose vaccination rates are about half the general population’s. Health officials are asking community groups to go door to door to reach unvaccinated people, and the city has also hired companies to promote vaccination in mostly Black and Hispanic neighborhoods.

Mr. Biden worked with Uber and Lyft, the two biggest U.S. ride-sharing services, to help jump-start the slowing vaccination rate in mid-May. The companies are offering free rides to vaccination sites until July 4.

In several states — including California, Colorado, Maryland, Ohio and Oregon — governors have dangled incentives in the form of lotteries that include cash prizes, scholarships and gift cards to keep the momentum going.

The incentives are a way “that moves the needles” for people who are waiting to get vaccinated, Dr. Bell said.

“I applaud them for being creative,” he said. “It eschews these false notions that we can’t appeal to people’s purse to make a good decision.”

‘I smell it, taste it, feel its heaviness’: Life in Delhi’s dust | Environment