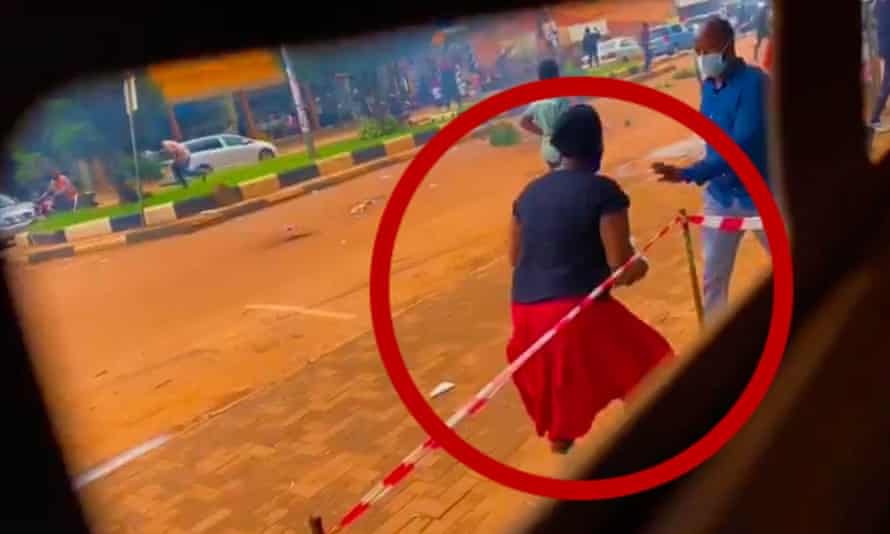 A single truck carrying eight police officers was responsible for a mass shooting in the centre of the Ugandan capital, Kampala, in November last year in which at least four people died and many more were injured, an investigation by BBC Africa Eye has found.

The shootings were part of a crackdown on protests in Kampala following the arrest of opposition leader Robert Kyagulanyi, a singer turned politician known as Bobi Wine, who was campaigning as a candidate for presidential elections held two months later.

More than 50 people were killed and hundreds hurt by security forces and police over two days in the capital and elsewhere. President Yoweri Museveni won a sixth term in office in the polls, which opposition politicians said were fraudulent.

Officials initially said that any casualties had been criminals and violent rioters, before admitting that some innocent people had died after being hit by “stray bullets”.

The BBC Africa Eye investigation, which will be released on Monday, reconstructs the killing of four people on Kampala Road as well as the death of a 15-year-old boy and the serious wounding of two women elsewhere in the capital. The analysis of more than 300 video clips from mobile phones and interviews with more than 30 witnesses strongly suggests that all were shot by police or soldiers and that none were engaged in any criminal activity or protest.

Authorities in Uganda admitted the vehicle identified in the investigation was a police patrol car, but said they had no information linking it to indiscriminate shooting.

Mobile phone videos and photographs show the patrol truck passing within metres of Kamuyat Ngobi, a 28-year-old mother of four, who collapsed and died with a single bullet in the head seconds later. A shot is heard on recordings as the police truck passed her.

Ngobi earned her living cooking and selling food to local businesses and had made a delivery to a local shop moments before she was killed. Images of her bloody body show smashed plates of food she was carrying to her grandfather in a nearby building.

“If I ever see the person who shot Kamuyat I will ask them to shoot me too. What hurts me most is that I will never see her again,” said Zikaye Takumala, her mother.

The same police vehicle continued along Kampala Road, passing a restaurant where two people were shot and injured. After driving another 60 metres, it passed John Amera, a 31-year-old father of two and mobile phone shopworker who was shot in the chest and killed. The next victim was 23-year-old Abbas Kalule, who was hit in the upper thigh and died in hospital four days later. The police truck then turned north-east and passed John Kitobe, who had come into Kampala to change money. The 72-year-old retired accountant was hit in the neck by a bullet and killed.

During the minute or so that the shootings lasted, there were burning road blocks on the Kampala Road, but none of the victims appear in any way involved in any protests.

BBC Africa Eye has also analysed a video that shows a “drive-by” shooting of two sisters, Shakira Nyemera and Shamim Nabirye, on Jinja Road in Kampala on the same day. The women are seen among a small group of local people sheltering from the unrest in a sidestreet and watching the road. A convoy drives past, at least one shot is heard and the two women collapse. Both women survived but doctors were unable to save Nabirye’s three unborn triplets. “I lost my children and I loved them,” she said.

Ugandan authorities claim to have no record of two women shot on Jinja Road, and said the incident had not been reported to the police.

The investigation also includes new evidence in the case of Amos Ssegawa, a 15-year-old boy who was walking home with his mother, Hajarah Nikitto, when he was hit in the face by a bullet. Eyewitnesses said that Amos was killed by Ugandan soldiers shooting from a military vehicle. The teenager was rushed to hospital but pronounced dead on arrival.

“It was the military that shot my child,” said Nikitto.

Ugandan authorities confirmed that her son was killed on 19 November, but again attributed his death to a stray bullet. A government spokesman told the BBC that innocent victims will be compensated, but that verification takes time.

During the unrest in November, Brig Flavia Byekwaso, a military spokesperson, described “a war-like situation” that meant the army “has to deploy”.

Museveni, who has been in power since 1986, has acknowledged that he reinforced security before the elections by deploying special forces who “killed a few” people he described as terrorists.