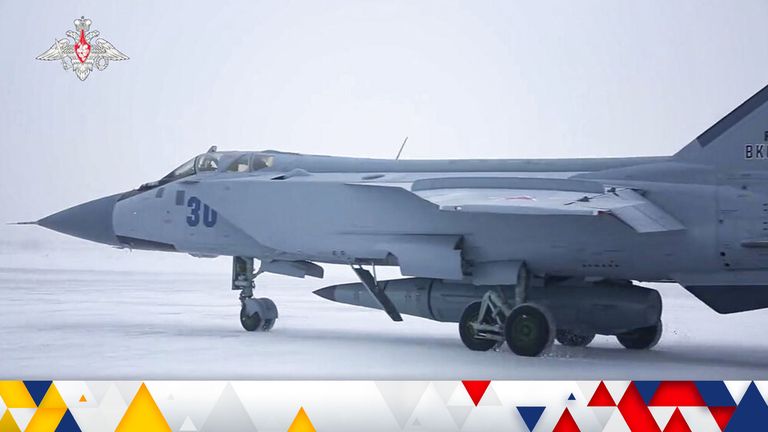 The UK, US and Australia have stepped up their defence partnership by agreeing to work together on hypersonic and anti-hypersonic weaponry.

The Australia-UK-US – or AUKUS – deal announced last September initially focused on sharing nuclear submarine development in the Pacific at a time of growing concern over China.

Now the three countries have also turned their attention to Russia and added new areas of co-operation – including on hypersonic weapon technology, which is said to have been used recently by Vladimir Putin’s forces in Ukraine.

In a progress update issued jointly by Prime Minister Boris Johnson, US President Joe Biden and Australian Prime Minister Scott Morrison, the leaders reaffirmed their commitment to a “free and open Indo-Pacific”.

They added: “In light of Russia’s unprovoked, unjustified and unlawful invasion of Ukraine, we reiterated our unwavering commitment to an international system that respects human rights, the rule of law, and the peaceful resolution of disputes free from coercion.”

The statement committed the countries to work together on hypersonics and counter-hypersonics as well as electronic warfare capabilities, while also expanding information sharing and deepening co-operation on defence innovation.

It comes after Russia said that it had deployed its “Kinzhal” hypersonic missile in Ukraine – a weapon that can fly at 10 times the speed of sound and cannot be reliably tracked or intercepted at that speed by any current defence system.

The US and China have tested hypersonic weapons and North Korea has claimed to have done so.

The latest joint AUKUS statement said the three countries would “work together to accelerate development of advanced hypersonic and counter-hypersonic capabilities”.

It also said the countries were pleased with progress in the partnership’s initial plan to help the Australian navy procure a multiple fleet of nuclear-powered submarines.

Last month, Mr Morrison announced a plan to set up a new submarine base on the east coast of Australia.

London, Washington and Canberra are also seeking to work together in cyber and quantum technologies as well as artificial intelligence and robot submarines – all also areas in which Western democracies are racing rival powers to gain the upper hand.

The initial announcement of the AUKUS pact caused outrage in Paris, as the submarine deal supplanted a previous plan for France to supply Australia with diesel-electric boats.