Undetected mutant COVID variants are likely to be running rampant in the US, health officials say 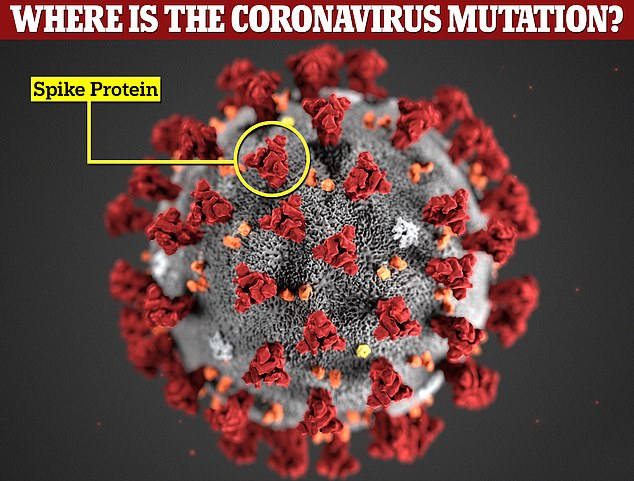 New mutant variants of the coronavirus could be running rampant undetected in the US due to a low level of genetic sequencing on positive COVID tests in the country, health officials say.

There are now more than 350 reported cases of ‘super-covid’ in the US from the three strains that were first detected in Brazil, UK, and South Africa.

However, health officials say it is very likely that the number of new variants circulating around the country is much higher since viruses by nature are constantly mutating as they spread.

Some mutations can be detrimental to a virus, causing it to die out, but it’s the fact that some can be more fatal, or even resistant to vaccines, that is cause for concern.

Scientists are typically able to monitor different strains through genetic sequencing which allows them to examine the virus from active cases and study how the particular strain will infect others and it will react to vaccines.

The South African variant has a mutation in its spike protein (circled in yellow) that makes it more contagious, capable of reinfection and potentially more immune to vaccines. Two people in South Carolina are the first US cases but, because they have not traveled recently and have no evident link, the variant may already be spreading in the US 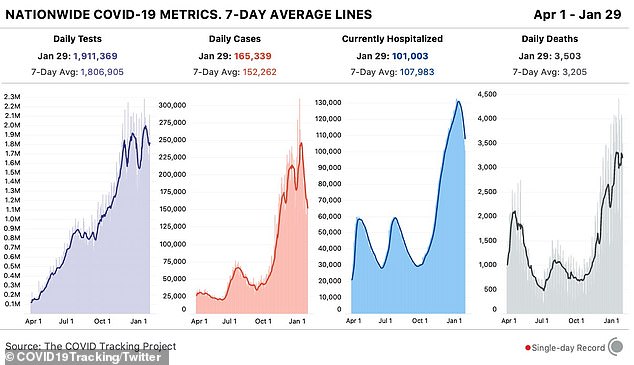 Another 165,339 cases were reported on Friday, with 3,503 deaths – a slight decrease from the previous day 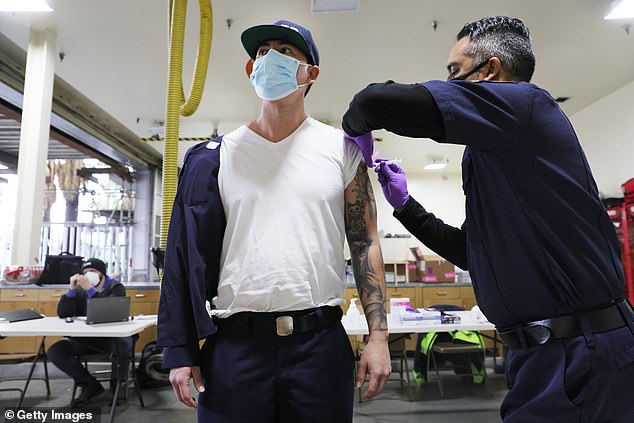 Although none of three new COVID variants have proven to be more fatal, they are more transmissible and experts fear they could potentially diminish effects of the vaccine

But detecting new variants through these means have been challenging in the US, where only a fraction of positive coronavirus tests are sent for further sequencing, according to The Washington Post.

Health officials say the emerging strains have now put medical experts and scientists in ‘a race against time’ to identify new potentially deadlier forms of COVID-19.

‘Genomic surveillance is probably the number-one thing, besides covid-19 testing itself, that we can do to track the virus,’ RNA biochemist Keith Gagnon of Southern Illinois University, told the Post. ‘Without it, we are flying blind.’

While health experts and scientists have supported efforts to conduct widespread sequencing, the shortage appears to be due to a lack of funding, according to the report.

The issue mirrors the roadblocks faced in the early days of the pandemic when coronavirus was spreading across the country unchecked due to a lack of testing.

The new variants have raised fears that they could potentially derail vaccination efforts in the country and wipe out months of progress.

‘Not every mutation is created equal,’ said Mary Petrone, who studies infectious diseases at Yale University. ‘The virus is going to get lucky now and again.’ 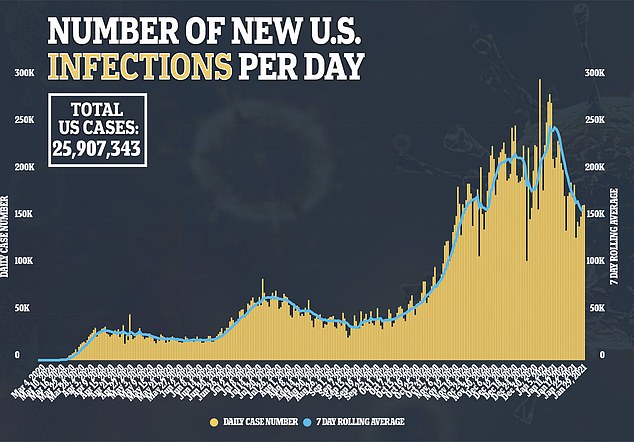 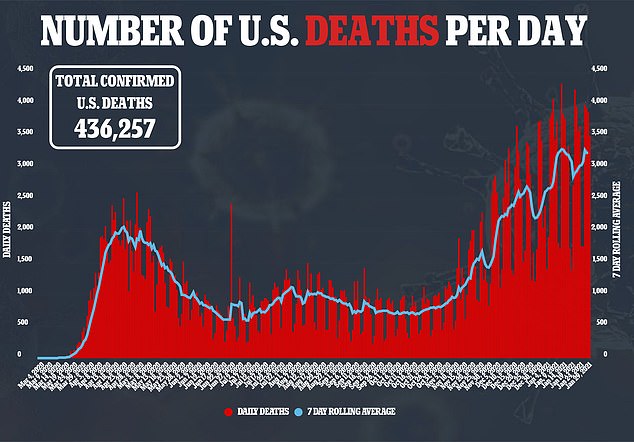 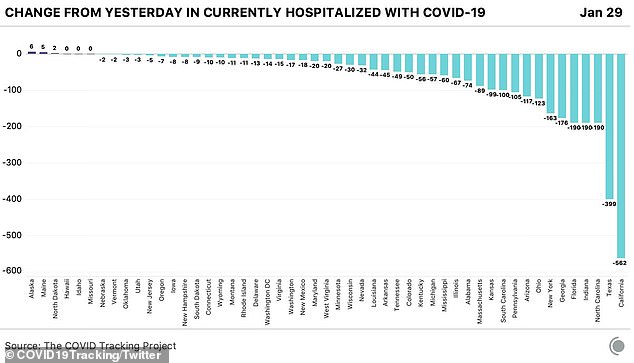 Recent data had also offered a glimmer of hope in the nation’s battle against the virus, with infection and hospitalization rates falling nearly everywhere in US.

And on Friday, zero states reported a record number of weekly cases for the first time since November 1, according to the COVID Tracking Project.

Hospitalizations remain above 101,000, however the number is continuing to fall in almost every state.

There are currently more than 25.9million confirmed cases of coronavirus in the country and 436,257 total deaths.

Another 165,339 cases were reported on Friday, with 3,503 deaths – a slight decrease from the previous day.

Although none of the three strains detected so far have proven to be more fatal, they do appear to spread more easily, which could lead to more hospitalizations and deaths.

One of the three main variants experts are watching was discovered in the United Kingdom late last year and has been detected in dozens of countries since. 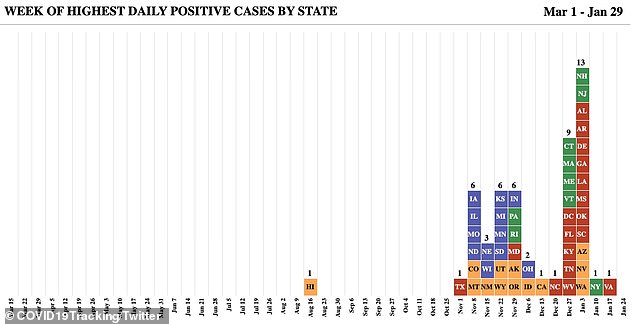 On Friday, zero states reported a record number of weekly cases for the first time since November 1, according to the COVID Tracking Project

Health officials initially said it didn’t seem to cause worse disease, but some newer information suggests it might – that remains unknown at the moment.

The variant might become dominant in the US by March, according to the Centers for Disease Control and Prevention.

Data so far suggests current vaccines should still protect against these variants, though there’s some concern their effectiveness may be slightly diminished.

There is some evidence that some antibody treatments may be less effective against certain variants.

There are ways to adjust vaccines and treatments to maintain their effectiveness, said Dr. Anthony Fauci, the top U.S. infectious disease expert. 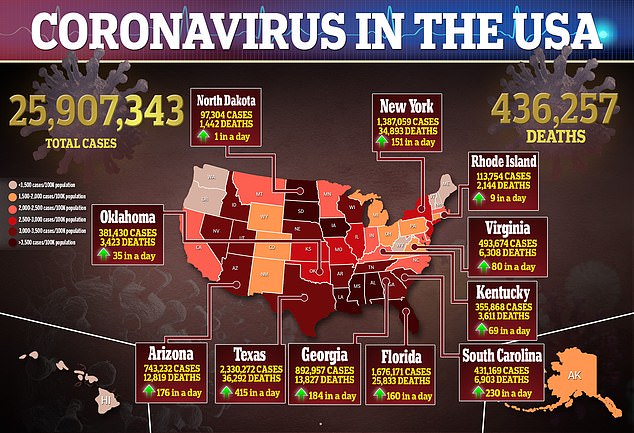