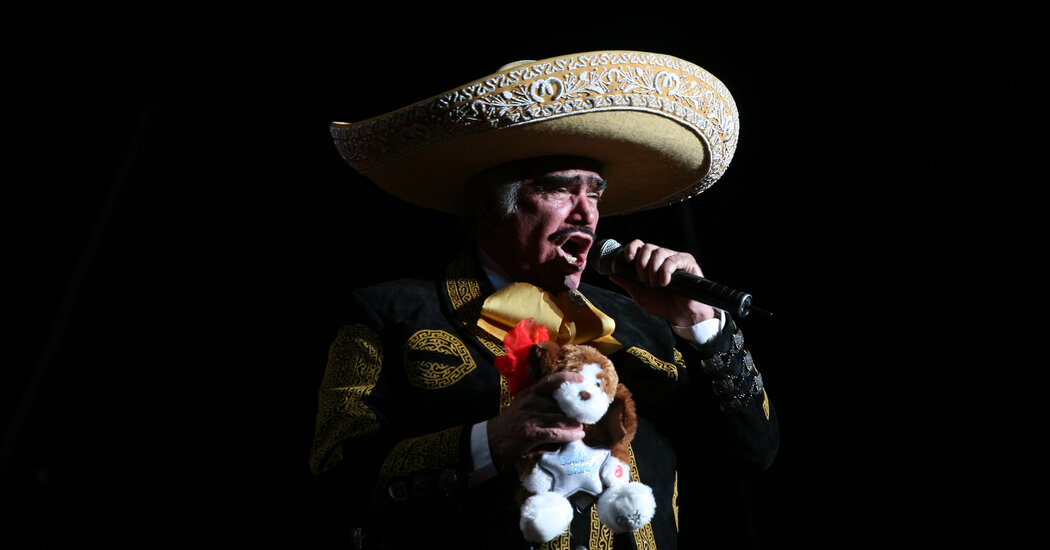 Vicente Fernández, the powerful tenor whose songs of love, loss and patriotism inspired by life in rural Mexico endeared him to generations of fans as “El Rey,” the king of traditional ranchera music, died on Sunday morning. He was 81.

His death was announced in a post on his official Instagram account, which did not give a cause or say where he died. He had been hospitalized for months after a spinal injury he sustained in August, according to previous posts from the account.

Accompanied by his mariachi band, Mr. Fernández brought ranchera music, which emerged from the ranches of Mexico in the 19th century, to the rest of Latin America and beyond. In his signature charro outfit and intricately embroidered sombrero, a celebration of the genre’s countryside origins, he performed at some of the largest venues in the world.

He recorded dozens of albums and hundreds of songs over a career that spanned six decades. His enduring popularity was reflected in a series of industry accolades, including a place in the Billboard Latin Music Hall of Fame, a star on the Hollywood Walk of Fame, three Grammy Awards and eight Latin Grammy Awards. He sold tens of millions of copies of his albums and starred in dozens of movies.

He was known for giving epic, hourslong concerts, communing directly with his fans and taking swigs from bottles of alcohol that were offered to him. Known fondly as “Chente,” he would tell his audiences that “as long as you keep applauding, your ‘Chente’ won’t stop singing.”

Reviewing a 1995 performance at Radio City Music Hall for The New York Times, Jon Pareles wrote that Mr. Fernández “sang with operatic power and melodrama,” flexing his “ardent tenor” to “prodigious crescendos and a vibrato that could register on the Richter scale.”

He continued to give marathon performances well into his 70s. At a 2008 concert at Madison Square Garden, Mr. Fernández held court for three hours. A lingering note delivered in his “lively, if slightly weathered tenor,” could render the audience silent, Jon Caramanica wrote in his review in The Times.

Vicente Fernández was born on Feb. 17, 1940, in Huentitán El Alto, in the state of Jalisco in western central Mexico. His father, Ramón Fernández, was a rancher and his mother, Paula Gómez de Fernández, stayed at home to raise their son.

He grew up watching matinee movies featuring the Mexican ranchera singer Pedro Infante, an early influence. When he was 8, he received his first guitar and began studying folk music. He left school in the fifth grade and later moved with his family to Tijuana after their cattle business collapsed. He told The Los Angeles Times in 1999 that he took whatever work he could, laying bricks and shining shoes, and even washing dishes.

“I’ve always said I got to where I am not by being a great singer, but by being stubborn, by being tenacious, by being pigheaded,” Mr. Fernández said.

He gravitated to a public square in Guadalajara called Mariachi Plaza, where he performed for tips, he told The Los Angeles Times. His career took off after he won a competition called La Calandria Musical when he was 19, he said in a 2010 interview with KENS 5 of San Antonio. He moved to Mexico City where he sang at a restaurant and at weddings, and unsuccessfully pitched himself to local record labels.

The labels came calling soon after the death in 1966 of Javier Solís, one of the most popular Mexican singers who specialized in bolero and ranchera music. Mr. Fernández then recorded his first albums, including hits like “Volver, Volver,” which elevated him to a level of fame that he had never envisioned, he told KENS 5. Other hits, including “El Rey” and “Lástima que seas ajena,” would follow.

“When I started my career, I always had the confidence that I would one day make it, but I never imagined that I would reach the heights at which the public has placed me,” Mr. Fernández said.

His public statements occasionally got him into trouble in his later years, such as when he said in a 2019 interview that he had refused a liver transplant because he feared that the donated organ might have come from a gay person or a drug addict. Earlier this year, he apologized after he was seen in a video touching a female fan’s breast without her consent while they posed for a photo.

Mr. Fernández married María del Refugio Abarca Villaseñor in 1963. She survives him, as do the couple’s children, Vicente, Gerardo, Alejandra and Alejandro, a Grammy-nominated ranchera performer.

Asked if a routine or exercise was a key to his longevity as a performer, Mr. Fernández told KENS that he walked every day for an hour and rode horses when he was home on his ranch. But when he was on tour, he said, “I don’t leave the hotels.”

“Still, that keeps me healthy,” he said. “My voice is well rested. When I hear the public’s applause, I don’t know where the voice comes from, but it does for three hours. You’ll have to ask God to find out how he blesses me every time.”

What causes tornadoes and are they getting worse with climate change? | US News

US tornadoes: Kentucky governor wants aftermath to be declared major federal disaster by government | US News