Waukesha parade crash: ‘Person of interest’ named as five killed and more than 40 injured after car driven into Christmas procession | US News 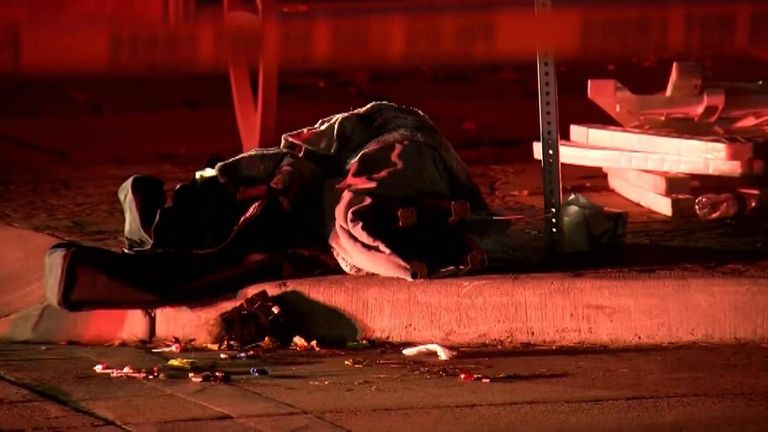 A man police are questioning after five people were killed and more than 40 were injured when a vehicle drove through a Christmas parade in Wisconsin has been named in US media.

NBC reported that Darrell Brooks, 39, from Wisconsin, is a person of interest being held in custody. He has not been charged with any crime, it said.

It comes after a red SUV hit dozens of people in the city of Waukesha, which is about 20 miles west of central Milwaukee, just before 5pm on Sunday.

One video showed a woman screaming “Oh my God!” repeatedly as a group of young dancers was struck, while a father described going from “one crumpled body to the other” in search of his daughter.

“At this time, we can confirm that five people are deceased and over 40 are injured,” the Waukesha Police Department said on its Facebook page. “However, these numbers may change as we collect additional information.”

Earlier, officials said a “person of interest” who may have a significant criminal history was being questioned overnight, adding that investigators were looking into the possibility the driver had been involved in an earlier incident involving a knife and was fleeing when the vehicle reached the parade.

The speeding SUV appeared to approach the parade from behind, and police chief Dan Thompson said an officer has shot at it in an attempt to stop it as it crashed through the barriers.

No one was injured by the police gunshots.

Eleven adults and 12 children were taken to hospital after being hit by the vehicle and Mr Thompson confirmed there were “some fatalities”. Many took themselves to hospital to be treated for injuries.

Corey Montiho, a Waukesha school district board member, told the Milwaukee Journal Sentinel that his daughter’s dance team was hit by the vehicle.

“There were pompoms and shoes and spilled hot chocolate everywhere,” he said.


Witness describes what she saw and heard in Waukesha after an SUV was driven into a crowd.

“I had to go from one crumpled body to the other to find my daughter,” he said.

Kyle Rittenhouse: Teenager says he is ‘not racist’ and supports Black Lives Matter in first interview since trial | US News