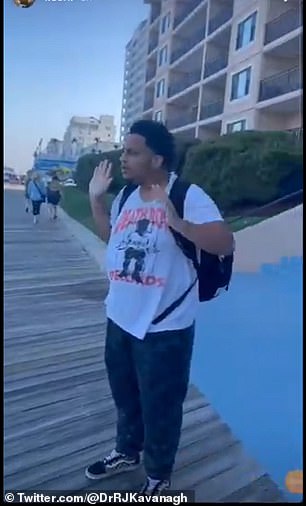 A black teenager was filmed being tasered by police after he allegedly ignored a request to stop vaping on a Maryland boardwalk.

Brian Anderson, 19, was zapped with the device in Ocean City, Maryland, on Saturday, despite his apparent cooperation with the five white officers surrounding him, and was filmed tumbling to the ground moments later.

A bystander filming Anderson’s arrest was filmed screaming at cops. She claimed he had been reaching for the strap of his backpack, as requested by police officers, when he was immobilized with the electrical current.

Anderson was one of four teens arrested on Saturday after being stopped by cops about vaping on the beach resort’s boardwalk.

Police told the the teenagers, all from Harrisburg, Pennsylvania, that vaping was prohibited on the boardwalk, except in designated areas.

The group walked away but police said they continued to vape. 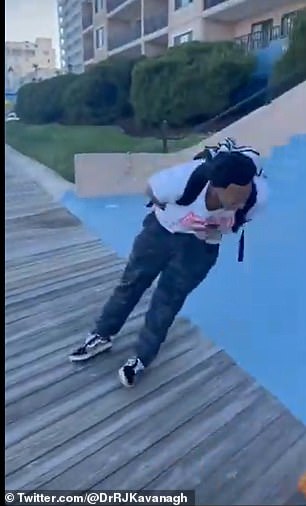 The viral clip , which has been viewed more than 1.9 million times on Twitter, shows the black teen standing a few feet away from officers with his hands up 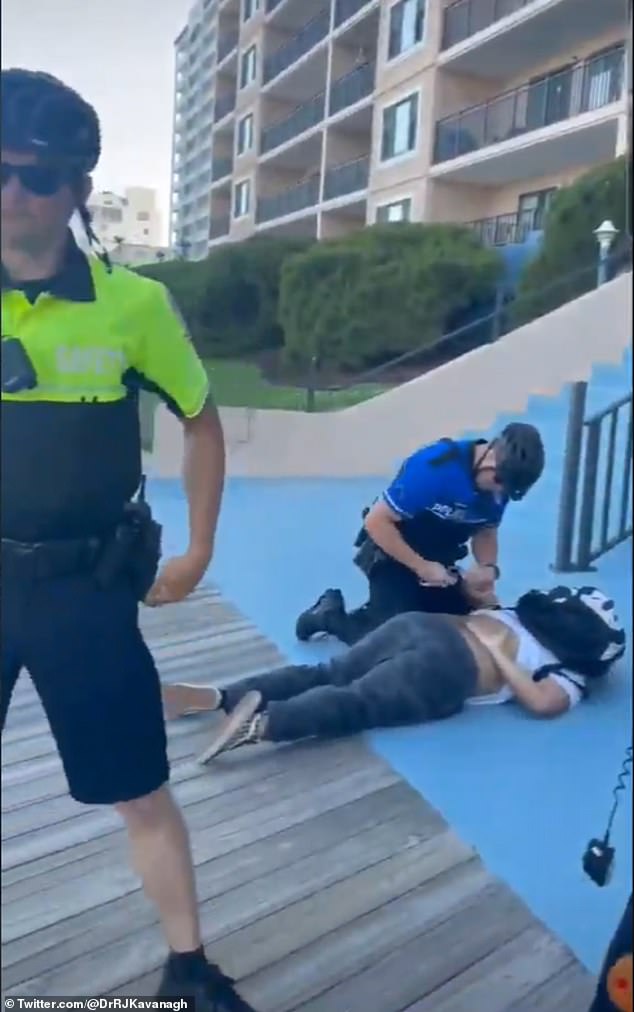 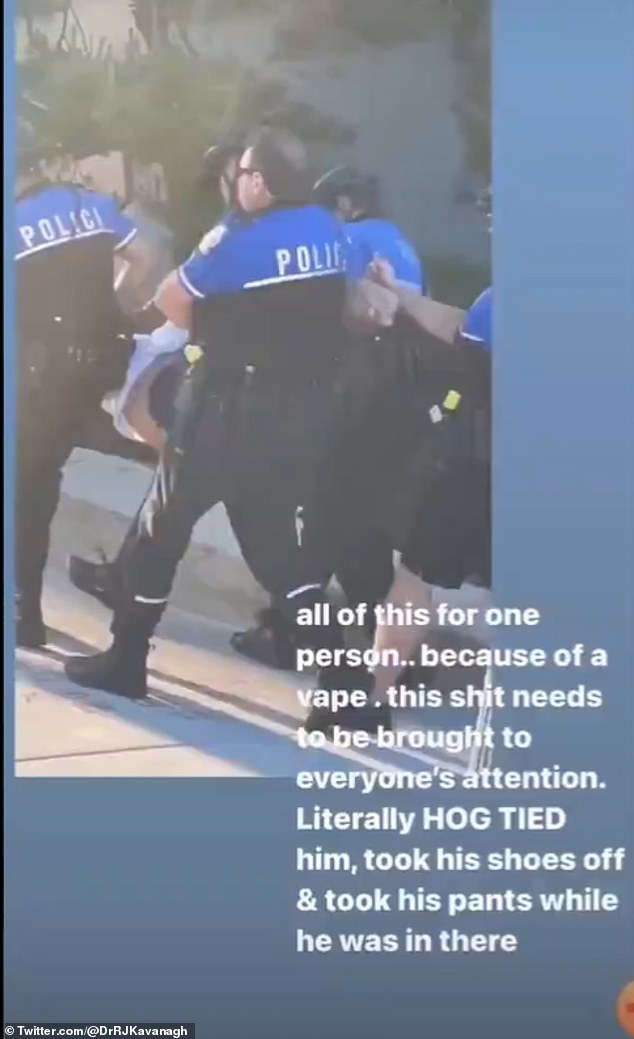 The viral clip, which has been viewed more than 1.9 million times on Twitter as of Monday, begins with Anderson standing standing a few feet away from officers with his hands up.

An officer yells ‘get down on the ground,’ and Anderson appears to reach for the strap of his backpack but is instantly tasered by an officer and falls to the ground clutching his stomach in pain.

‘Stop! He was standing there!’ a woman screams at the officers as they handcuff Anderson on the boardwalk.

‘What is wrong with you?’ one person ask the police as one officer tells the small crowd to  back up.

‘Y’all did that for no reason’ the woman tells the officers.

A separate clip appears to show Anderson handcuffed and being carried away by five officers. 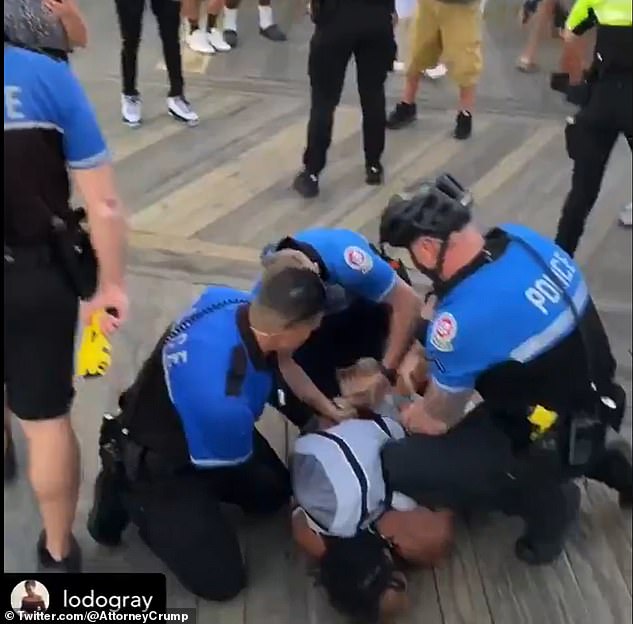 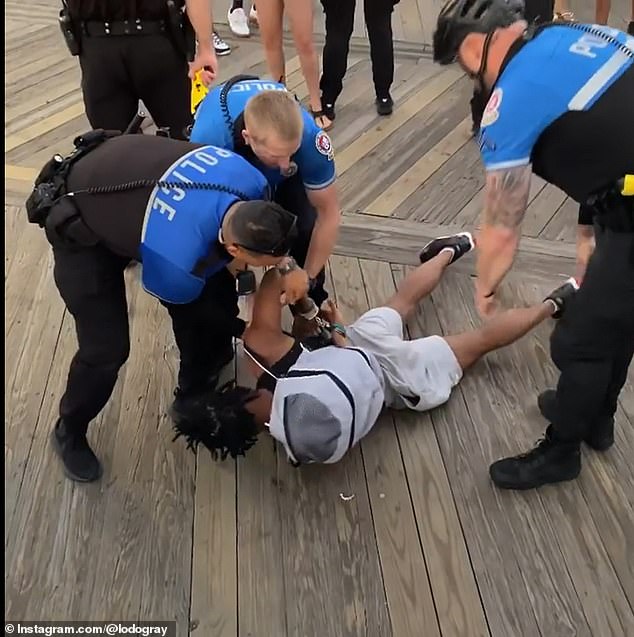 The town of Ocean City said in a release that Anderson was arrested for failure to provide necessary identification for vaping.

Police said Anderson resisted arrest and was charged with disorderly conduct, resistance and interference with an arrest, second-degree assault, and failure to provide proof of identity.

Three other teens were arrested after ‘a large crowd of people began to form around the officers,’ including Kamere Day, 19, who was arrested for yelling profanities and approaching officers during Anderson’s arrest, the release said.

Jahtique Lewis, 18 was also arrested for allegedly pushing an officer in the chest while yelling profanities and trying to throw a bike at an officer and Khalil Warren, 19, was arrested for becoming disorderly after being warned that he was standing on private property, the release said.

Additional footage captured Warren’s arrest in front of a large crowd as several officers are on top of the teen attempting to handcuff.

An officer tells Warren to ‘stop resisting’ and he responds ‘I’m not resisting.’

At one point an officer is seen kneeing him three times on his side.

Police said in a statement that they are aware of the various clips circulating online  and defended the officers use of force.

‘We are aware of the social media videos circulating regarding this incident,’ Police said in a statement. ‘Our officers are permitted to use force, per their training, to overcome exhibited resistance.’

‘All uses of force go through a detailed review process,’ police added. ‘The uses of force from these arrests will go through a multi-level examination by the Assistant Patrol Commander, the Division Commander and then by the Office of Professional Standards.’