Why More People Are Getting Two Different Coronavirus Vaccines 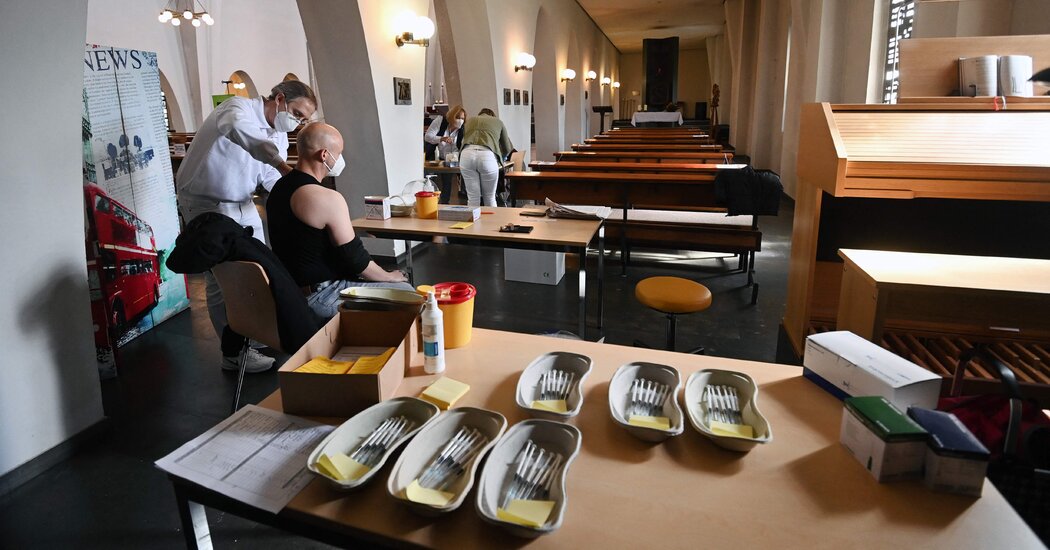 The most widely used coronavirus vaccines are designed as two-shot inoculations, and nearly everyone worldwide who has had both doses has received the same vaccine both times.

But that is changing, as more countries are allowing — and even, in some cases, encouraging — mix-and-match inoculation, with people receiving a first shot of one vaccine, and then a second shot of a different one. On Tuesday, Germany’s government revealed that Chancellor Angela Merkel had received two different shots, adding to the growing interest in the practice.

Some nations have tried that approach out of necessity, when supplies of a particular vaccine ran short; or out of caution, when questions were raised about the safety of a shot after some people had already received their first doses. U.S. regulators so far have been reluctant to encourage the practice.

But scientists and health policymakers are interested in the possibility that giving different shots to the same person could have significant advantages.

Here are some common questions raised by mix-and-match vaccination.

What are the potential benefits?

Mixing vaccines — scientists call it “heterologous prime-boost” — is not a new idea, and researchers have experimented with it in fighting a handful of other diseases, like Ebola.

“The argument is that one and one makes three,” said John Moore, a virologist at Weill Cornell Medicine. “How well that argument holds up in practice in the Covid area is going to need to be judged by the actual data.”

In addition to the potential immunological benefits, mixing and matching also “offers much-needed flexibility when vaccine supplies are uneven or limited,” said Zhou Xing, an immunologist at McMaster University in Canada.

Multiple clinical trials are currently underway to determine whether there are benefits or drawbacks. Researchers at the University of Oxford are testing different combinations of vaccines — including the AstraZeneca-Oxford, Pfizer-BioNTech, Moderna and Novavax shots — in the Com-Cov trial, and the U.S. National Institutes of Health recently launched a trial of mixed booster doses.

Russian researchers are testing a combination of their Sputnik V vaccine and the AstraZeneca shot. Sputnik is, itself, somewhat based on a mix-and-match approach, with the first and second shots having different formulations.

Most studies are still in early stages, but some have released promising preliminary results. Last month, for instance, a team of Spanish researchers announced that people who received a dose of the AstraZeneca vaccine, followed by a dose of the Pfizer vaccine, showed a robust immune response.

Preliminary data from the Com-Cov study suggests that mixing and matching vaccines may increase the odds of mild and moderate side effects, including fever, fatigue and headache.

The data suggest that a mismatched regimen “might have some short-term disadvantages,” the researchers wrote, although it is also possible that the side effects may be a sign of a strong immune response. Most side effects faded within 48 hours, they found.

Overall, scientists say that they expect the data to show that the approach is safe. “As we’ve learned in 18 months of Covid-19 shocks, never say never, but its really hard to rationalize any new risk associated with what is really a basic, tried and tested immunological approach,” Daniel Altmann, an immunologist at Imperial College London, said in an email.

Where is this happening?

Health authorities in a variety of countries are allowing some degree of mixing and matching. The U.K. began allowing vaccine mixing in the early days of its vaccine rollout.

Officials in a number of countries — including Germany, Canada, Sweden, France, Spain and Italy — have said that people who have received one dose of the AstraZeneca vaccine, which has been linked to a rare blood clotting disorder, can receive a different vaccine for their second shot. In response to delayed deliveries of the AstraZeneca shot, South Korea announced last week that health care workers who had received a first dose of that vaccine could receive the Pfizer shot as a second dose.

Canada’s vaccine advisory panel has also said that the Pfizer and Moderna vaccines can be used interchangeably.

The U.S. Food and Drug Administration has been more conservative. The agency says that people who got one dose of either the Pfizer or Moderna vaccine may receive a second dose of the other in “exceptional situations,” such as when the original vaccine is not available.

“I cannot imagine that the F.D.A. will allow this kind of mix-and-match strategy without properly evaluating clinical trial data,” Dr. Moore said.

Why did Angela Merkel get two different shots?

Germany is fiercely protective of medical privacy, even that of its leaders, but Ms. Merkel’s spokesman, Steffen Seibert, suggested that her vaccine choices were in part about setting an example.

Isolated reports of abnormal clotting and bleeding prompted many European countries to suspend use of the AstraZeneca shot in March. Most of them, including Germany, resumed its use a few weeks later, after a review by the European Union’s drug regulator.

But when Ms. Merkel got the AstraZeneca shot in April, many people remained deeply skeptical of it, slowing the vaccination campaign.

Germany’s vaccine commission recommended in April that anyone under 60 who had received a first shot of AstraZeneca should follow it up with either Pfizer or Moderna. Regulators relaxed that advice this month, but Ms. Merkel, who is 66, got the Moderna vaccine a few days ago.

“Perhaps she can also relieve people of their worries about a so-called ‘cross-vaccination’ by getting one herself,” Mr. Seibert said.

It was not clear why she had the Moderna shot, when there is considerable national pride in Germany about the work of BioNtech, a German company.

Dr. Moore, of Weill Cornell, said he saw no problem with mixing vaccines, but he was curious about what expert advice Ms. Merkel had received about it. He said he doubted that an American president would have done the same at this stage of the pandemic, because U.S. regulators, who are extremely cautious, have not approved it.